Newbie questions about an St-70

Newbie questions about an St-70

New to the forum here so go easy. I have a newly acquired St-70 that I was hoping to get some help with. I'd like to know what kind of modifications this one has undergone, and what kind of things could be done to improve upon them. There is the conspicuous absence of the capacitor can normally seen rear right? How does this affect the tone of the amp? Also notice that in the underside shot a couple of the resistors(?) are oozing brown goo. I suspect not a good thing.

Know that I do not build amps (yet) so any fixes would need to be done by a professional.

I also would love to know peoples opinions on tube preferences. For example are the RCA 12bh7a tubes seen here a good match? Can a 12au7 be substituted for better or different sound quality?

Your input would most appreciated. 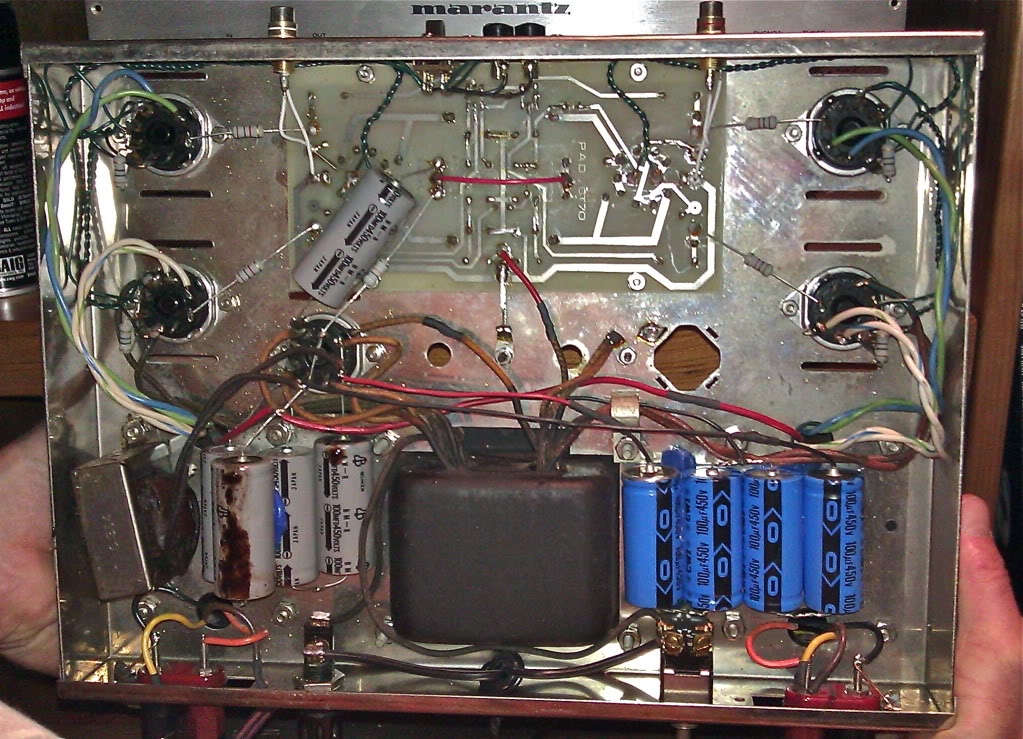 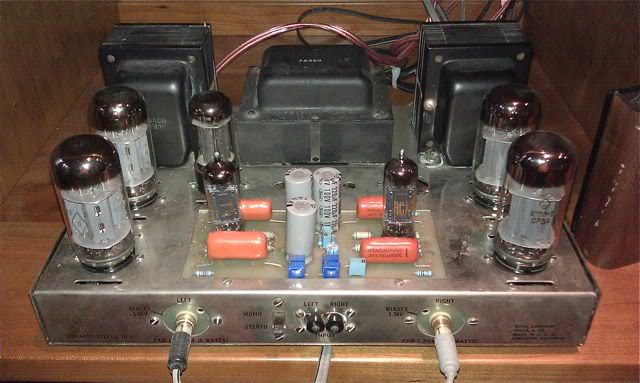 Hi Mose and welcome to the Dynaco Tube Audio Forum ..

Your ST-70 has had some severe alterations and modifications. The quad cap is not present but has been replaced by some under chassis power supply capacitors. The amp also has some type of "on board bias system" like the VTA driver board. The driver board is an aftermarket driver board that I am not familiar with. It says "PAO ST70 or "PAD ST70" on the bottom of the board but I am not familiar with that board? If it uses 12BH7A tubes then usually you can also use a 12AU7 or a 6189 or a 5963 tube in place of the 12BH7A. It may or may not sound any better with one of the other driver tubes that I mentioned?

IMHO > That amp was done over in a non standard way and it should be rebuilt the proper way. If you want it rebuilt the right way send a PM to Forum member "Sal". Sal is a very good Dynaco technician and will rebuild the amp correctly. If done so, the amp will be more reliable and probably sound a lot better to ..

The PCB in your ST70 was made and marketed by Purist Audio Design in Lake Jackson Texas (about 40 miles south of Houston, Texas). It was one of the Replacement Boards that Roy Mottram reviewed for Glass Audio Magazine back in the early 1990s.

The version of the board that I bought in the early 90s used 12AX7s tubes and gave you the ability to indiviually set bias on the 4 output tubes, so matched pairs of tubes were not needed. 12BH7s could be used, but dropped the output level because of the reduced gain that the tube provides as compared to a 12AX7. Bob mentioned Sal in his answer to you and Sal had a version of your PAD70 that he repaired for a customer because it had very low output and was using 12BH7s. I know, because I sent Sal a copy of the PAD70 documents that I had and I believe that he replaced the driver tubes with 12AX7s and got the output level up.

As to what else was done to your ST70 -- obviously, the Quad Cap was replaced by under chassis Capacitors and because of how those caps are placed, the Choke was moved over to the far left from the far right. The missing Dynaco Bias Pots were removed when the PAD70 board was mounted and has that functionality. The stock Selenium Rectifier was also removed because the Diode that normally replaces it is also on the PAD70 board.

I hope this is what you were looking for and helps. If you need more info just ask.

Thanks Bob and stew for your input. I appreciate it. In response to Stew's information I'm still curious about a few things. Most importantly how does this particular approach to modifying the amp affects the quality of the sound? A loaded question for sure but I guess I'm wondering if this modification by PAD is good or bad. Also, using a 12ax7 preamp tube does not sound all that appealing as a choice for a stereo amplifier. From tinkering with guitar amplification I steer away from them in the tone stack.

Thanks agin for the help,

I saw you response to my PAD70 info -- please don't discount the use of 12AX7s in audio gear. There are some very fine vintage 12AX7 tubes that sound wonderfull in all sorts of Tube Gear. Fisher in their 400, 500B/C and 800 series stereo receivers used an assortment of Telefunken and Mullard and Holland Bugle Boy to achieve some fine sound as they conditioned the signal for the output tubes. I must confess that most of the modern 12AX7s just don't cut it.

You asked about the PAD70 being a suitable upgrade board and it's quality of sound. In my case, the company was local to where I lived and after the Glass Audio Review I thought I would audition the board. I liked what I heard and in the 1990s with the supply of matched pairs of 7199 tubes (original ST70 driver tube) rapidly drying up, I bought the PAD board and never looked back. I still have that ST70 and it's driving Advent A3 Speakers -- the sound is clean and involved and not fatiguing to my ears. Just IMHO and everyone's got an opinion of what sounds good to them. Good luck with your research with Sal.