I have just recently completed a modification of my stock ST-70 by installing a VTA octal board with cap upgrades from Tube4hifi. I also replaced the power transformer, choke, tube sockets, speaker and input posts, and all the off board transistors with new ones from Dynakit. The idea here was to bring my amp into the 21st century after nearly 50 years of flawless performance since I built it in the early sixties.

I am not knowledgeable as it pertains to electronics, however I have never had issues working on this equipment. Over the years I have swapped out the selenium rectifier, replaced the pcb with a pristine original I bought from Bob several years back, as well as replacing the quad cap.

Yet, with all that said, I am at a roadblock with this current upgrade. I cannot get the amp to bias properly. I have been in contact with Roy, who has been more than kind in walking me through some basic troubleshooting to try to figure out what is going on here. I have followed Roy’s instructions that came with the upgrade, by installing just the rectifier and the two left power tubes and adjusting the bias pot by measuring the voltage across the 10 ohm resister located at pins 1 & 8 of the output socket to chassis. The first tube tested will bias to 0.40 volts with ease, but when I move to the 2nd it will bias no higher than 0.35 volts at full CW rotation, and in checking back on tube 1 I find that its bias has fallen below 0.40 volts and cannot be brought up to proper level even at full CW rotation. Same thing happens on the right side.

Roy has had me test some of the readings on the unit to see if proper voltages, etc. are within range. Additionally, I have tested some on my own, relying on postings on this forum by others with similar issues. Unfortunately, the only testing equipment I have is my Sperry DM-350A multimeter.

In no particular order, I have:

Measured voltage a pin 6 of each output socket with the tubes removed and found it to be -46 to-47vdc, within range according to Roy.

I do not have access to a tube tester, however the power tubes I am using are two year old Genalex KT-77s. I also have a quad of Rubys that I swapped into the unit and retested the bias, with no change in the results.

I swapped out the rectifier with another I had on hand. No change in bias results.

I swapped out the quad cap I bought from Kevin a couple of years ago with the original I had removed. No change in bias results.

I have sent a photo of the board and chassis wiring to Roy and his observation is the job looks good.

My next step is to send the unit to Roy and have him determine what is going on here. However, the shipping cost and risk of transit damage are troubling to me. But, probably more important to me, is the pride of ownership in doing this on my own—most likely the main reason most of us treasure these old babies and try to keep them going after all these years.

So, in the end, my question to any of you so inclined is, what do you recommend I do to further troubleshoot this problem before giving up and sending it to Roy?

Have you also replaced output transformers ?
( you mention "off board transistors" which must be wrong)

Now, is your multimeter checked ?

At last, measuring pin 5 ( grid) with output tubes out, will they
follow the adjustment pot ? What is the voltage for ccw and cw ?
Try this for all 4 tubes.

Thank you for the reply.

I have not replaced the output transformers. They are the originals with the cloth leads from the 60s. They were operating normally just prior to my upgrade. I do not know how to test them. Is there a way for me to do so easily with my multimeter?

It is the off board resistors that were changed. Typing error on my part.

I am relying on a post by Bob Latino relating to biasing a ST-70. Here is Bob's response regarding the voltage at pin 8.

Peterh, I also thought about calibration on my meter. I did check it against both a D battery and a 9 volt and it appears to be properly calibrated.

Lastly, in checking the voltage at pin 5 I am assuming the rectifier is installed, how about the driver tubes? Also, is this a pin 5 to chassis DC test?

I tested the voltage @ pin 5 of each output tube. The results are as follows:

I tested the voltage @ pin 5 of each output tube. The results are as follows:

That range should be ok. You have also demonstrated that all pots
are working and that you know which pot goes to which tube.

I have not measured the B+ in my vta, but according to dynaco
schematic there should be app 435V at GZ34 pin8.
Also dynaco suggests that -32V is grid voltage for one specimen of tube.


If you install the output tubes, set pots midway and measure voltages :
whats on pin 3 4 5 and 8

you've got perfect range on your bias pots. I haven't seen any tube yet that won't bias properly with between -30 to -50vdc.
If you can't get enough bias current at full CW, then you'll need to reduce the amount of bias voltage.
Try changing R39 from 6.8K to about 22K, that will give you less bias voltage, thus more tube current.
That should change your voltage range to around -20 to -50v on pin 6's.
But that still won't do anything for whatever is causing the hum problem you mentioned before.
Also, SOME tubes like a smaller grid bias resistor. Change those (R29-32) to 150K instead of 220K.
breading

Thanks to all for the valuable input. I have taken the voltage measurements with
the bias pots at dead center and they are as follows:

The Genalex KT-77 pin readings are:


The Quad Cap readings are:

As per bobs advice you should reduce the bias voltage after the
diod.

The 10 ohm resistor should run between pin 8 and ground, as pin 1 is not connected on KT77 tubes. Is it possible that two of the tubes are connected correctly and that the two showing very low current are not?

Yes, I changed the resister to a 22K one that came out of the original stock setup. It is the old carbon style. It did lower the bias voltage, but did not alter the outcome, still unable to obtain the proper bias.

I would expect around 30V in the grids. maybe even lower. What di you have ?

And, how does it sound with speakers connected ?
Bob Latino

See if you can post a photo of the inside wiring of your amp. Your B+ high voltages on the output tubes are all low by 30 volts or so. Pins 3 and 4 of all the output tubes should be in the 435 - 440 VDC range. If the high voltages are all low, sometimes it becomes difficult to bias the amp. The 337 VDC to the driver board is 40 to 50 volts low. Low B+ voltages are usually rectifier tube related or quad cap related but you said you replaced both. I would normally say maybe your line voltage is low BUT - the 363 VAC on pins 4 and 6 is perfectly normal so the power transformer is OK and apparently your line voltage is OK.

Post a photo of the inside wiring. Check the "Sticky posts" above on how to post a photo on the forum.

Thanks for the reply. I will try to post photos. However, I have a meeting to attend and will not be able to do so until this evening. I sent Roy several photos via email earlier. As for the rectifier and quad cap. I had the tube checked yesterday and it tested fine. As I noted in my earlier posts, the quad cap is 2 years old, I got it from Kevin in 2010. I will pull it and take it in for testing. The output transformer is brand new, just got it, also from Kevin.

Here are photos of the VTA mod. of my ST-70. These are
photos I sent to Roy earlier. Since these photos were taken I have
disconnected the board from the chassis so as to get to R29-32 and make
the resister change you recommended. I am not sure I can get it back
together since the stranded wire, once disconnected from the board pins
seems next to impossible to reinsert into the hole, even after
de-soldering, but I shall try again with new wire.

Notwithstanding
the positive testing of the rectifier and the quad cap, I have ordered a
new quad from Kevin and purchased a new rectifier. When they arrive I
shall install and try again to bias the amp.

Please let me know if you see anything in the photos that catches your eye. 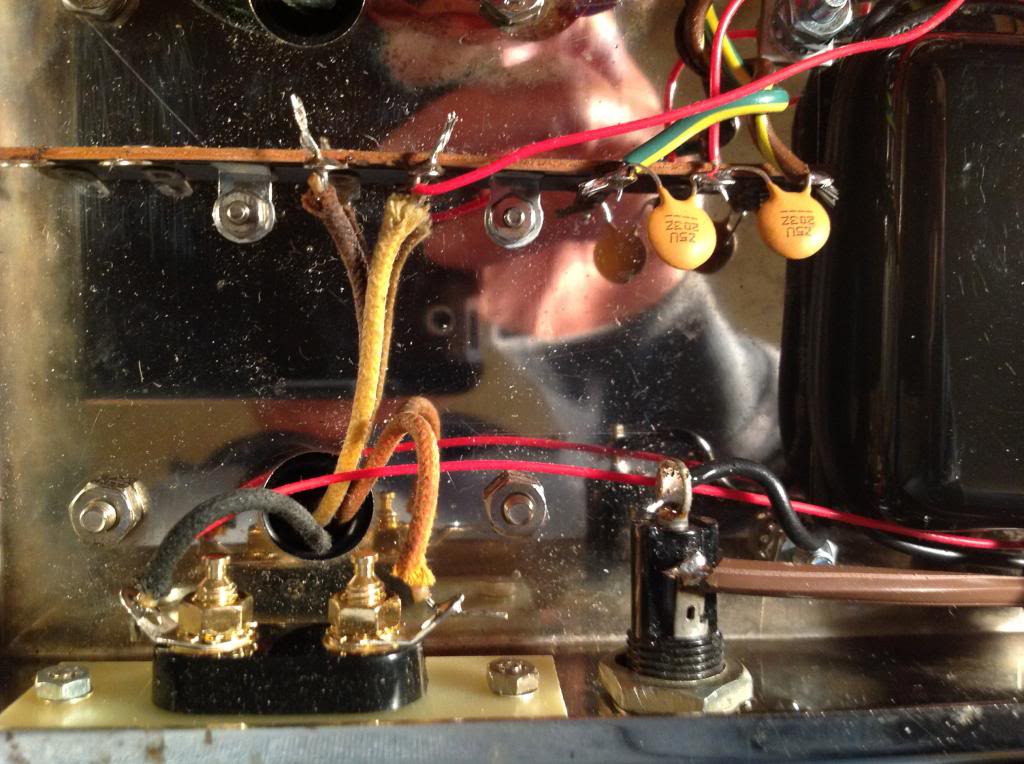 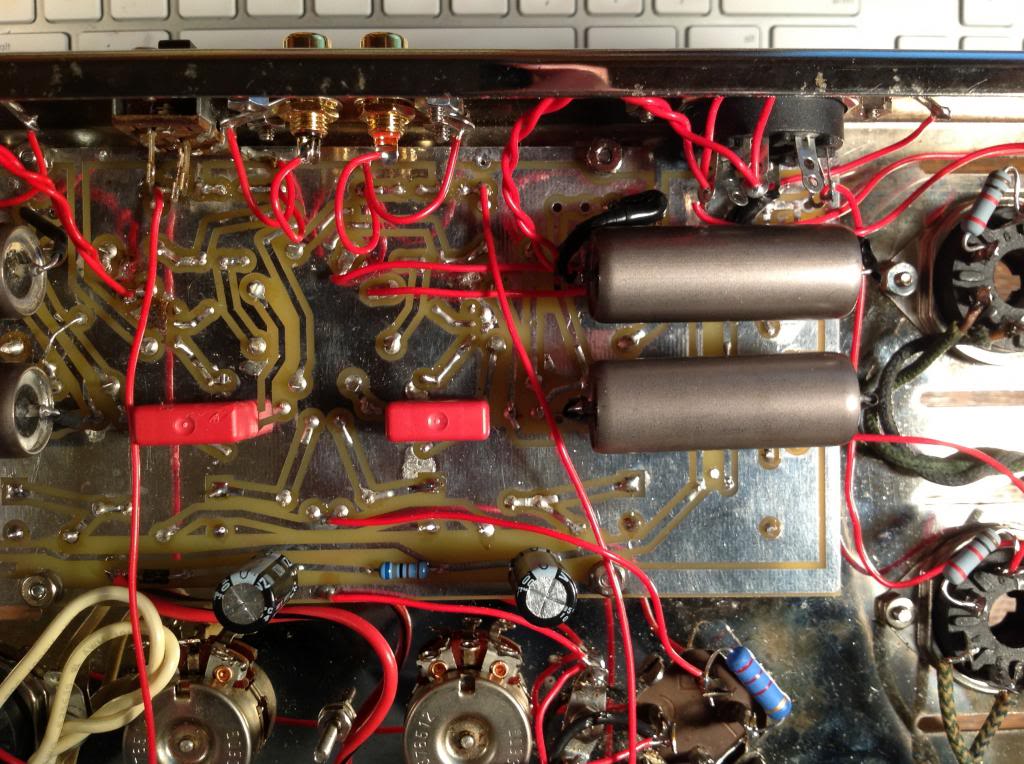 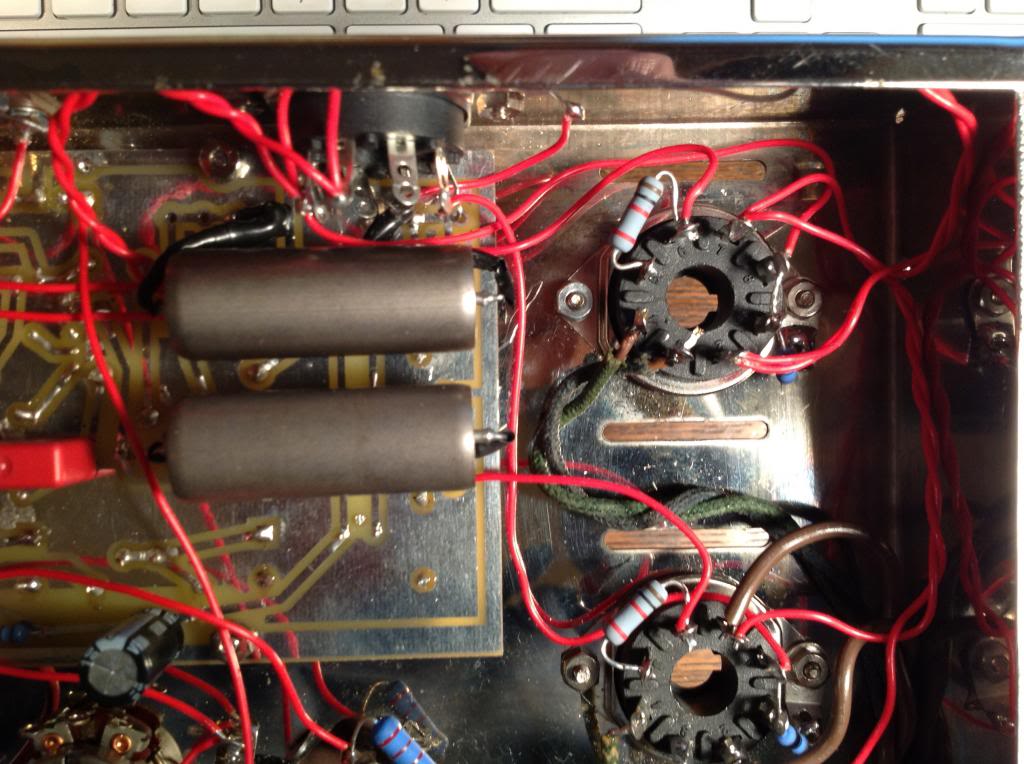 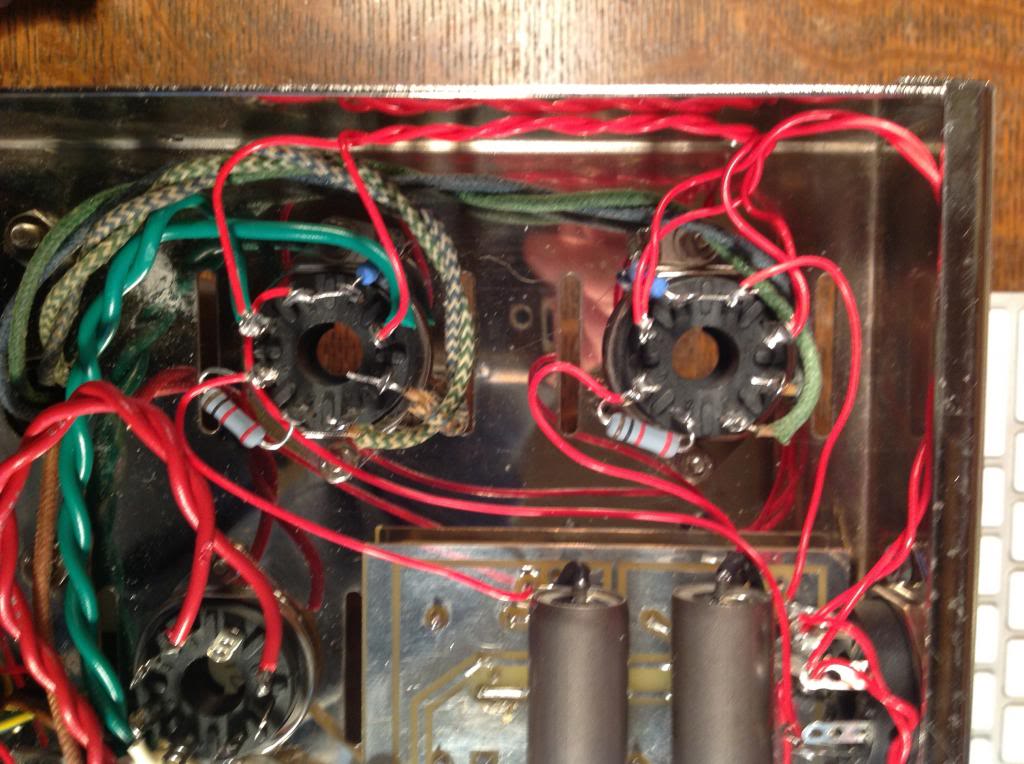 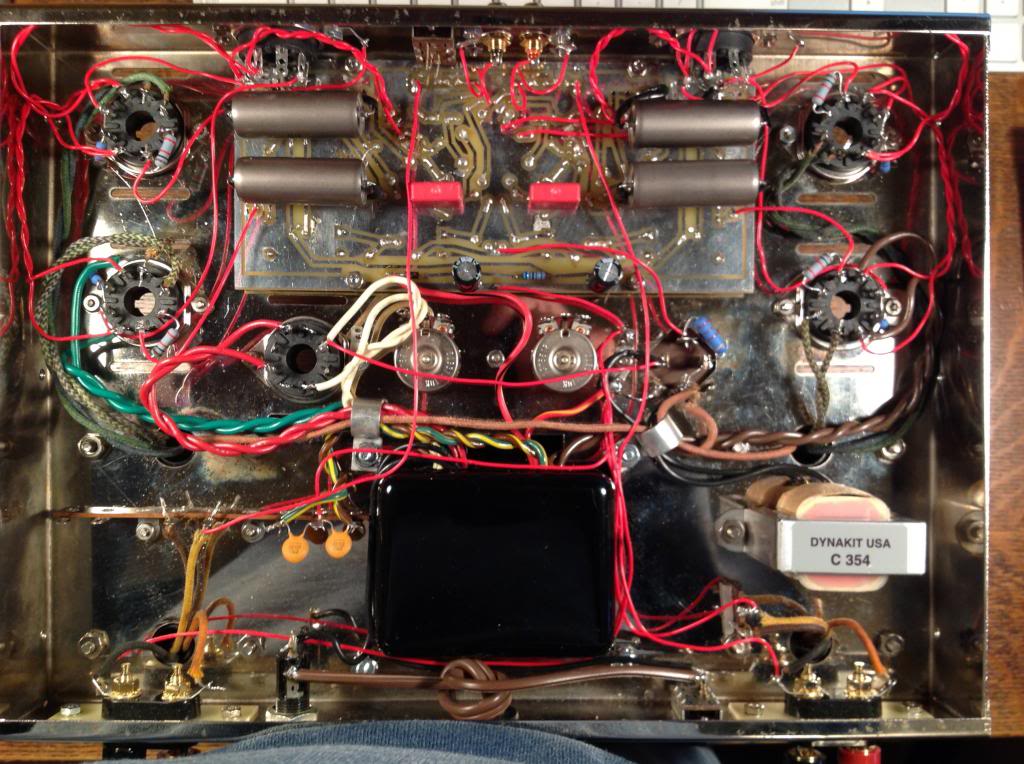 danf wrote:The 10 ohm resistor should run between pin 8 and ground, as pin 1 is not connected on KT77 tubes. Is it possible that two of the tubes are connected correctly and that the two showing very low current are not?

I need clarification. Are you saying the the 10 ohm resistor is to run from pin 8 to ground and pin 1 is not involved at all? Because in the instruction I was provided pin 1 was involved.

My wiring is as follows:

danf wrote:The 10 ohm resistor should run between pin 8 and ground, as pin 1 is not connected on KT77 tubes. Is it possible that two of the tubes are connected correctly and that the two showing very low current are not?

I need clarification. Are you saying the the 10 ohm resistor is to run from pin 8 to ground and pin 1 is not involved at all? Because in the instruction I was provided pin 1 was involved.

My wiring is as follows:

kt-77 on the other hand has these connected internally : http://frank.pocnet.net/sheets/163/k/KT77.pdf
thus leaving pin 1 unconnected.

As Peter suggests, it is correct to wire pins 1 and 8 together. However, I would verify with the amp off and the capacitors discharged that you measure 10 ohms from each pin 8 to ground. The fact that two of the tubes are conducting current and two are not suggests that some wiring error exists for the two that are not conducting current. There are a limited number of possibilities, and comparing the working to non working locations should help.
tubes4hifi

OK, so the mystery and troubles are now solved, Bruce (breading) sent me his amp to look at.
As I mentioned back in post 5 or 6, most tubes will normally bias within the range of -30 to -60vdc bias, but in this case I found
that wasn't working. I had to change the range of the bias pots to -20 to -50vdc. Usually I do this by changing R39,
but I wound up changing R37/R38 to 18K from the usual 27K to get this range. The Gold Lion KT77s wound up biasing correctly at around -25vdc bias.
Another (separate) problem was that the front right PIO capacitor was actually shorting to ground.
I'll put up a separate post about the care that needs to be taken using these, since they are so large, and their body is metal.
As for bias, this has come up a few times before, so I hope to post an article about how bias really works, and what to do in those rare cases when the range of the bias pots is not enough.
Sponsored content