I bought several of my 6CG7s and NOS Tung-Sols from Dave. He's a ham and very tube-savvy. Good guy.
jimmytamp

I can hear some changes in wider stereo & bigger sound stage especially for vocal/solo instrument records.

As much a NOS tubes probably would sound if they are testing strong I can't see why someone would want to seek out and buy these tubes without having a chance to test them with both a tester and a listening test. A friend and audio technician explained to me that the chances are very good that these finds of fairly large quantities of NOS tubes probably turn because in reality these tubes were tested and rejected and not destroyed. Along the way documentation of the tubes rejection status is lost and then someone stumbles across these and thinks they found a great tube when in reality all they are, are extremely inefficient light bulbs...and not very bright at that.

That being said I'm using both Tung Sol KT120's and 12AU7's in my VTA ST-120 and I'm quite happy with the sound. I'm using a Weber SS rectifier and since finding and correcting one minor issue haven't had a problem.

However awhile ago I did purchase a quad of new Genalex Gold Lion KT88's and one red plated within 30 minutes. Everyone here pointed out that it was somehow my fault for this failure stating that I didn't bias the tubes correctly and that I didn't make sure all the socket contacts were clean and tight. After that failure I did get a replacement from Jim McShane though it didn't come without he too implying I should have some how powered down sooner so he could test the reason the tube failed.

Anyway after that I put the KT120's back in and haven't had a problem since. Considering how reliable the TungSols 12AU7's are I'm reluctant to try anything else. Though I do also have ElectroHarmonix 12AU7's tubes that have also been trouble free.
corndog71

I too am hesitant to buy nos tubes because you just really don't know what you're getting. I have heard stories about how lots of out of spec tubes would get sold out the back door of tube factories. I prefer tubes from RAM labs because Roger seems to know what he's doing and has a long history of working with tubes. Still, no matter who you get tubes from there's always the chance of tube failure at anytime. There's no obligation to roll different tubes however it's not a bad idea to invest in spares.
Jim McShane

Dogstar wrote:However awhile ago I did purchase a quad of new Genalex Gold Lion KT88's and one red plated within 30 minutes. Everyone here pointed out that it was somehow my fault for this failure stating that I didn't bias the tubes correctly and that I didn't make sure all the socket contacts were clean and tight. After that failure I did get a replacement from Jim McShane though it didn't come without he too implying I should have some how powered down sooner so he could test the reason the tube failed.

I think it needs to be said again, so I'll say it. ANY tube - NOS Western Electric to the poorest quality current production - can fail. And the odds of a failure are much higher when a tube is brand new. Over the years I've had plenty of brand new GE 6550As, RCA 5V4GAs, original Tung-Sol 12AU7As, Ei KT-90s, etc. that failed during testing. I have also had current production tubes fail at the same point. One reason I run in power tubes is to try to catch any "infant mortality" issues before it hassles a purchaser; the odds of a failure drop dramatically as the hours of use increase, they then pretty much level off until the tube begins to wear out.

Tubes are HAND MADE devices. There is always going to be (and always has been) a small chance of a new tube failing despite careful testing and run in (a.k.a. "burn-in"). So it behooves anyone who uses tubes to keep a close eye on them when they are newly installed. Often there is a bias or contact issue that is the cause of the trouble; in fact those are the number 1 cause of difficulty by a very wide margin. But there are some few tubes that simply fail and the sooner you catch it the less chance there is of more damage occurring. Your forum mates here (IMHO) were simply trying to make sure you were aware of what could occur, as was I. The tone of your post seems to indicate to me that you felt you were being chastised or punished somehow by me. I certainly didn't mean that, but I did mean to be sure you knew to watch new tubes carefully. If you did know that my apologies - but I'd rather tell you than risk NOT telling you and finding out later that you DIDN'T know.

BTW, the current failure rate on the Genalex KT88s is so low I can't even recall the last time I replaced one under warranty. I'd "guesstimate" maybe 0.5%...

Regarding purchasing NOS tubes - buy them from a good vendor and you have no worries. Buy them elsewhere and there is more risk involved.

Finally, I posted a FAQ in the Tubes Asylum forum that may be very helpful. You can find it at http://www.audioasylum.com/audio/tubes/messages/25/253369.html

I hope this all is some help anyway!

Hi,
My name is David and I am a tube-roller.
My story is no different than yours. My tube-rolling habit crept up on me, so slightly I did not see it happening.
Then I awoke one day to red-plates and smoking transformers.
My wife had left, the dog had turned to ribs unable to crawl to his evaporated water dish, and the cat was pissed-off.
But I had tubes -- an abundance if you will. They filled every available crevice on the shelves and brief-cases in the Man Cave.
I realised I was powerless and that only a Higher Power could rescue me from this obsession. I humbly submitted to the necessity of a Larger Amplifier.
By then, the bank was calling the note on my home, but the Higher Power demanded yet a new decolletage of those beautiful glass jugs and would not be quieted. Soon, every nook and cranny of my now-empty house had tubes, NOS sheets of millimetre-thick slips of metal packed in vacuum.  I gave up Scotch for beer. Just to determine which one of the several thousand was the Very Best I changed out my tubes daily, mangling the tubes and those delicate sockets in the process to the point where I could not tell the sound of one from another. The Doctor said the problem was not with my ears, which were fine, but deeper in my head. What he actually said was that the problem was not in our stars but in ourselves.
I returned home from the doctor's visit, threw my priceless collection of my black-plate 6550s into the dust-bin, and donated all my septuagenarian 6CG7s to the Starvation Army. Shaking like a dog crapping peach-pits, I telephoned a recovering 112-stepper, who advised I call Jim McShane and a guy in China I know and ask 'em for exactly the number of tubes my gear required and not a penny more nor less.
It's been 90 days now, but the amps have managed quite well with a combination of well-tested dirt-cheap consumables. Other than the routine bias check I leave them alone. This has not been easy, but the weekly meetings of Tube-Rollers Anonymous feature some pretty good sound. I may even get my house back.
Kentley 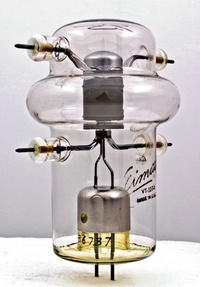 We admire your courage, Dave, and applaud your "coming out" as a tube junkie.
You should be made aware that there is an alternate (!!) program to help the tube-afflicted. It is a 120 step program called "AC Stairway to Salvation" in which each step represents one volt of your line AC. I'm currently (!!) struggling with the all-important First Volt - admitting that I am powerless(again !!) to control my ebay tube-search addiction. Good luck - we're pulling for you. P.S. {We are, of course, required to chant "OHM" for a minimum of one kilowatt/hour per day.}
deepee99

Kentley,
Thank-you so very much for your support. This has been a very difficult Hall. But Sonics are like that.
I must confess to our group that I did recently acquire a baker's dozen of Civil War-era tubes and they are on their way from Swaziland, courtesy of PayPal. Never knew tubes could be made without glass but am anxious to try them.
The great news is that I have renegotiated the mortgage and am back home, but my Better Half was spotted leaving town on the back of a Harley, driven by a 20-year-old Hell's Angel.
It had a transistor sound system that was heard a block away.
No accounting for taste.
Sponsored content