How to tell if underpowered

How to tell if underpowered

I know what to listen for on SS gear, when power is lacking. I have the VTA70, powering Bowers 705S2’s. I am running GL KT77’s, and am wondering if they need more power via stepping up to the VTA120, but it is not cheap to buy the parts. So, I want to make sure it is necessary. What should I be listening for to indicate my speakers are underpowered?
B&WTube

I probably need to provide more detail. I can play my speakers significantly louder that I can stand, HOWEVER, it is the tweeters that blow me out of the room. At a lower volume level, everything seems balanced. As I crank it up, the highs seem to start running away from the mids and bass. Obviously, low notes require much more power that high notes. I am also at the very bottom of this speakers recommended wattage (I know this is not the best indicator). What are you thoughts?
peterh

B&WTube wrote:I know what to listen for on SS gear, when power is lacking. I have the VTA70, powering Bowers 705S2’s.  I am running GL KT77’s, and am wondering if they need more power via stepping up to the VTA120, but it is not cheap to buy the parts. So, I want to make sure it is necessary. What should I be listening for to indicate my speakers are underpowered?

Detect if the amp is clipping. Could be made with an oscilloscope connected across the output,
some scopes has a adjustable limit detector that could be made to indicate , else you have to
observe the scope.

Can those speakers be bi-amped or bi-wired? If so maybe if you think you need more power and they can be bi-amped why not invest in another VTA amp and that will probably solve your issues. Maybe :-)
DavidR

It's been my understanding that vacuum tube amps do not clip the signal like a SS amp does but rather it just rolls off the signal.
MechEngVic

I don't think it's your amp. Your speakers, although very high end, aren't really big enough or efficient enough to get real loud. I bet their sound is amazing though. If you want to keep them, add a subwoofer and set it to the highest crossover point, that'll help supplement the bass your main speakers are lacking. Adding more wattage will only be noticeable if your speakers have more to give.
pichacker

Tiny bookshelf speakers like yours are never going to cut the mustard if you want to "feel" the bass. At low volumes I bet they are very sweet but with small drivers like they have you just won't move the air!!

At the price bracket they are in you're not going to want to change them so as previously said a sub may be your only choice if you wish to have loud punchy sounds.

Your most difficult task will be getting a sub that will compliment them in your listening environment and getting the crossover optimum.

I have Fritz Carrera 7 Be bookshelf (actually monitors) speakers and they really move some air, albeit they are rated down to 36Hz. Roughly the same physical size (16 x 9 x 12) In experimenting with a systems frequency disc, they move plenty of air down to 30hz -- truly feel it from the rear port and also my chest at seating position. Cannot rave enough about these for their price point. Truly amazing and nothing tiny about their sound / range. Powered by a VTA ST-70 with KT-66's. NO sub required.
chad1376 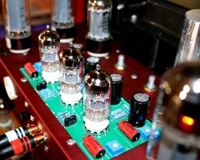 Well, if it makes you feel any better, I'm running some little 4" Fostex horns.  I'm overpowered, and no, they don't move a lot of air.

Sensitivity is 88dB but recommended power is 30-120 watts.  You should be fine with power.
I doubt moving to the VTA120 will make much difference.

It sounds more like it’s your speakers.  I’ve heard B&W speakers get a little hard sounding in the upper frequencies.  Maybe you’re just sensitive to them.  Maybe these just aren’t right for you.

You could pull the crossovers and maybe try different caps in the tweeter circuit.  Or maybe just bypass the tweeter caps with a 0.1uf cap of a different brand.  Perhaps a copper cap like Miflex.
30 Ounce

I have B&W Signature 805’s and a Velodyne HGS 15 subwoofer. I use Bob’s M125’s with kt120’s and can tell you that is probably the right amount of power for them. My room is also 13x24x8 so that’s a fair amount of volume to fill. I doubt the 88db efficiency rating, I bet they are closer to 84db. A hard, irritating treble is a sign of under powering your speakers. For every doubling of power you will get 3db more headroom/volume. So if you go to the st120 you’ll have 3db more headroom, the M125 will get you 6db more.
tubes4hifi

in my experience, you can never have too much power, especially with SS amps, but I've also found that 5 watts (for NORMAL listening levels) of tube power for MOST speakers is way more than plenty
unless you want people a block away to hear your stereo. Average speakers 88db/w, so at one watt you've got 88db. That's loud, not LOUD, but louder than my normal 80db listening level.
10w would be 3db louder, 20w 6db louder, 40w (typical VTA70 amp) 9db louder. That's VERY LOUD.
It also depends on more than just speaker sensitivity. Speakers compress music sounds and reach a point where more power doesn't make things louder, it just distorts because the speaker can't move
linearly in response to input power. You want loud? Get big speakers and a big amp. Not many speakers (under let's say $10000) can handle more than 100-150w.
Also don't forget, let's say at 1/2 volume, you're only putting out about 1/10th the full power. That's 4wpc on an ST70, which is a nice listening level.
B&WTube

Thanks for all of the responses. I am actually in the process of getting my hands on 3 different DAC’s to try. I am suspicious that the power supply in my entry level Soekris powered via USB is the problem. I have the bigger brother of the Soekris on the way, the new Schiit Bi-frost II, and a buddies older but much more expensive Rega.

Roy has been great helping me on a power tube blowing issue, in another thread, but as soon as it is squared I will report back on if I solve my sound concerns with a different DAC...I think I will have some other interesting things to share with the community, as I have been playing with a lot of things and made a few interesting discoveries.
Sponsored content