You are not connected. Please login or register
Go to page : 1, 2

Hi Bob:
I am curious to know what you think of the new octal boards Roy has introduced as an option in the ST-120 format.
Would these boards be electronically equal to or have any advantages or disadvantages in the ST-120?
I like the look of the octals and there are also a lot of octal tubes options out there to choose from.
Actually a tube rollers dream. Are you considering an octal option in your kits?
Would the octal tubes physically fit on the existing board?
Baddog

There will be no octal options for the VTA amp kits. Just the standard gain and the lower gain options using the 9 pin driver tubes (12AT7, 12AU7, 12BH7) will be offered ...

Thanks Bob for your time an the site
tubes4hifi

Bob's got his hands full with the amp kits he has now.
The new boards are available from me anytime anyone wants one.
The PCB is exactly the same size as before, with almost identical parts layout, you can compare in the drawing below.
Top drawing is the board I've been selling for the past ten years or so, the bottom drawing is the new octal version.
The tubes are bigger, but using a CCS actually eliminates quite a few parts, so not as crowded, and you get the octal sound!
Contact me by email or PM if you're interested.
info@tubes4hifi.com
the board is now listed on my webpage about 1/2 way down -
octal driver board

Saving my pennies for a ST-120
and that octal option looks Nice!

The board is the same for the VTA ST-70 and the VTA ST-120 but the components on the board are not the same from one amp to the other.

Thanks for clarifying my question Bob!
(doh - it's hard to ask what you don't know about)

So, a ST-120 kit (components) with an octal boatd option is a possibility. Correct?

I don't have the resources here to stock the octal board as well as the 9 pin board. If you want an ST-120 kit with an octal board, then I can sell you the kit minus the board and you can get the octal board from Roy.

Thank you Sir!
You guys are a wealth of information.

Looks like you have black JFETs on the sides of the Octal tube sockets or something... What are those? and what are they needed for? The black items with the 3 pins? I see 2 of them on the board aside the inner edge of the outer two octal sockets. Curious what your design has them in for?

Mantha3,
those little black guys are the CCS (constant-current-source) components for the phase inverter,
gives perfect balance with zero adjustments.
Lowers distortion and generally improves the sound quality 10-15%
They are not IN the signal path, they are a current source for the cathodes of the tubes.
Yes, these boards will work in either ST70 or ST120, minor parts changes but otherwise identical.

For those who have ordered in the past week or two, you should be getting your kits soon.
The demand was overwhelming and I ran out of several parts needed.
mantha3

Dang it's nice to hear someone apologize that,

Especially in this day and age.
It's obvious that you're offering an outstanding product.
Good on ya!

Question about the CCS (constant-current-source) components. The older VTA board has 2 pots that you typically set to mid balance per instructions and then you solder on the bottom of the board. Are these basically doing what the AC Balance Pots are doing? can you use something like these CCS (constant-current-source) components in place of the 10k pots on the older 9 pin board?
tubes4hifi

Roy:
So are we looking at a noval board with a CCS available from tubes4hifi soon?
Will there be a conversion kit or will it be offered only as a new board?
Bob:
Will you be offering these CCS boards as an option or as the regular board on the ST-120?
Badddog

When the supply of my present boards is exhausted the the new CCS noval board will become the standard board for the VTA amp kits.

OK, here are the latest photos I promised to post earlier . . .
I think I've notified all the buyers, but if I missed anyone, notice that there is one short jumper on one of the tubes,
it's shown on the PCB layout diagram but not mentioned in the minimal instructions I sent with the boards.
(the blue-green shine on the board is my T-shirt reflection)

apparently some people were not aware that I also have octal boards for the MK3, these came out the first of January
and I've sold quite a few of them already, here's a photo of a completed board 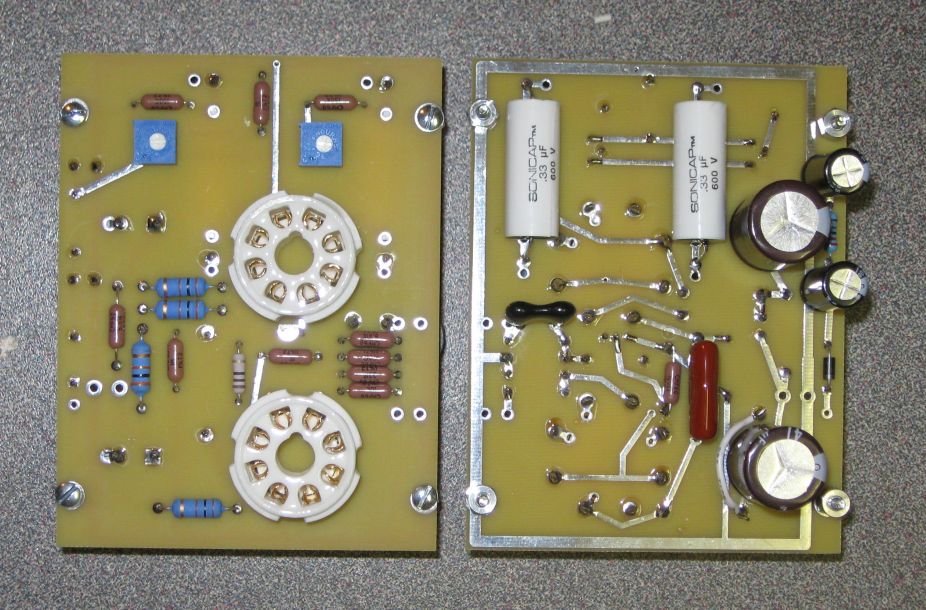 I would appreciate knowing that this new circuit has been exhaustively vetted with performance metrics posted on the website...

I have a pair of Mk3's that I bought in 2001. They were slightly upgraded with tube sockets, some new wiring, jacks, etc. But pretty much stock. Up until about 2008 I was just listening to them with the stock driver board. I mean the stock phenolic water sponge of a board. I finally decided to upgrade the boards to glass epoxy and while I was at it, use new matched high tolerance parts. But still the same stock circuit. It did sound way better. I won't go into details. I knew there were other driver board options but it wasn't easy to figure out which was the best way to go. so i put that on hold until recently.

About a month ago I decided it was time for a driver upgrade. After reading what I could and emailing some of the vendors I settled on Roy's octal boards for the Mk3. Tung-sol tubes came from tube depot. This week I set out to build the boards and do the install. It went reasonably well except for a small hiccup that Roy helped me diagnose. Basically even though my Mk3's are wired to stock, I had to switch the outputs of the driver boards to the driver tubes to eliminate the feedback through the output xformer. after that i had working octal drivers. I basically completed this last night.

My initially listening (using well worn in svetlana flying C 6550's) was a bit of concern as there was a lot of grain and grit especially on the mid range. but after about 2 hours the sound started to mellow and smooth out. i attribute this to burn in. both the driver board and the tubes were new. but after a few hours it was really starting to reveal itself.

Here is what I wrote to Roy as my initial impressions. First some context about me and audio. I have been an audio enthusiast for 27 years and a bit of an electronics hobbiest. I listen to a wide range of music. My current system is a pair of Martin Logan SL3's, Martin Logan Dyano sub, Audio Innovations L1 pre-amp, Dynaco Mk3's and on the front end I use a Mac/Fidelia into a dBx Quantum II DAC or Benchmark DAC1 and also an Oracle Delphi Mk2/Linn Ittok LV4/Benz Ruby 2/heavily upgraded Parasound phono stage. I prefer a minimalist audio path. I buy into quality electronic components and balancing but I don't buy into anything more decent copper cables and regular power cables. My preference is for vinyl.

Its after 3am and i am still up listening. but time for bed. here are some initial impressions. much more controlled bass without giving up warmth. controlled and smoother extension more so than stock. the mid range confused me at first. i didn't like what i heard. very shrill and grainy. i was thinking maybe just because i have only been listening to stock for so long. but then after a couple hours it started to come together. i attribute this to burn in? its still getting better and better as i listen. so where its now, about 2 hours in, fairly loud volume. the midrange is definitely different - more forward and real. if i thought stock was real, your boards are even more natural. this is where the (burn in?) changes are happening most. at first shrill and now blending in more. there is just more detail like a veil blocking sound was lifted. better transient response on things like the snap of the vocal cords when singing. i can hear things i couldnt head before, in the quieter ambiances. i mean really! i've heard things in the silence with your boards more than stock, like real things in the audio. case in point, at the end of Radiohead "Everything in its right place" there is a what sounds like a lamb stick in very very quiet just at the end of the song. i've never head that before even listening only days ago on Stax Lambda 407/1T2 system. the high end is more precise than stock. the changes are less in the high end but still part of the over-all enhancement. depth of field is deeper too, as heard on my reference tracks for that quality which makes sense since more quiet detail is getting through. you can "hear" silence now (silence being not entirely silence - ambiance). over-all its a pretty dramatic step up. not subtle. really, like a new higher quality amp. after shipping and everything, with the tubes (quad matched), the cost was $110 canadian each - welllll worth the price. wow.

it blows my mind that c1950's amps would sound so good. i know your board is a big part of it bur even stock they sound amazing. a great platform to improve on. but still they are vintage, wow like 60 years old now. crazy that i am listening to them today.

i figure after about 10-15 hours they should be totally broken in and sounding great.

I am also building one of Roy's VTA/MK3-Octal amps and Roy mentioned to me that you criss-crossed the VTA Board's outputs to the the 6550 tubes in order to solve a feedback problem.

Was this a high pitched squeal that occurred with all tubes in their sockets and about 20 seconds after power was applied?????

In my case, if there are no 6SN7s in sockets I don't have a squeal. Was this like what you ran into?

You say you are running a basically stock amp with the new VTA Board.

Did you have to drop the stock 6800 Ohm resistor on the Quad Cap to get the caps output in line with the 380 volt VTA Board's B+? I ask, because my Quad Cap's final output is about 530 volts and that goes directly to the circuit board.

Any response would be greatly apprecialted.

the connections for the new octal board in the MK3 are identical to the connections for the MK3 board I've been selling for the past 10 years, it's identical, see drawing here:
pin 1 of the quad cap is from pin 8 of the rectifier tube, and goes to the input of the choke (about 490vdc)
pin 2 of the quad cap comes from the output of the choke and goes to the red wire on the output transformer
(B+ to the output tubes, about 480vdc)
A 6.8K 2-3 watt resistor goes from pin 2 to pin 4 of the quad cap. Pin 3 can be jumpered to pin 4 also.
This then goes to the B+ input on the PCB, giving approximately 400vdc under load.
Bias voltage when measured on pin 6 of the output tubes should be around -50 to -55vdc, giving a bias current of around 50ma measured by reading 0.50v across the 10 ohm cathode resistors.

See, Roy, you got to use that diagram afterall!