Bob what are the differences between using these two tubes in your amp? Is it just different sound presentation? Does the KT-88 increase the output?
Bob Latino

Re: Differences between EL34 and KT88 tubes.

rwferr wrote:Bob what are the differences between using these two tubes in your amp? Is it just different sound presentation? Does the KT-88 increase the output?

The difference is really just sound presentation. The EL34 tends to be more "tubey" and the KT88 tends to be a little more linear from top to bottom. The KT88 tends to have a little more output at the frequency extremes. When you have an upgraded transformer, as you do, you can use either tube in your amp. In fact in your amp you can use 6L6, EL34, KT66, KT77, 6550 or KT88 tubes.

Bob I have seen in some other threads that you prefer the KT77 in your amp to the KT-88 or EL-34. What are the differences to you? I have only used the KT-88 so far.
Bob Latino

rwferr wrote:Bob I have seen in some other threads that you prefer the KT77 in your amp to the KT-88 or EL-34. What are the differences to you? I have only used the KT-88 so far.

The JJ KT77's are nice sounding but have quality control issues. Many early samples of the JJ KT77's had smaller than normal sized pins which didn't fit the tube sockets well. I bought a quad about 2 years ago and had to send two tubes of the quad back because of this issue. One tube of the quad actually fell out of the socket (!) when I turned the amp upside down to take the bottom cover off. Now supposedly this issue has been addressed by JJ and the new quads have normal sized pins but there still lurks the possibility of some of the older stock still being on some dealers shelves. Genalex Gold Lion now makes a KT77 tube but I have not heard this tube so in all honesty I cannot comment on its sound.

The ElectroHarmonix KT88's that you have in your amp are great sounding tubes for the money and a real good value. 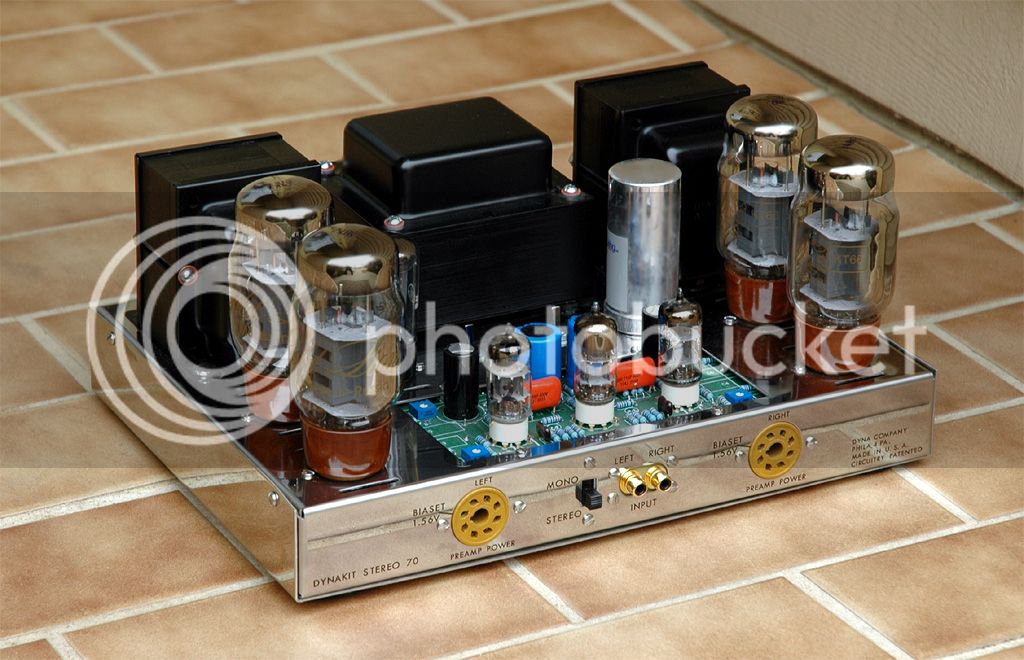 Thanks for the info Bob.

How much would you have to do to the power supply of a Mk 3 to run EL34's instead of 6550/KT88's? Would pentode/triode make any difference?
Bob Latino

Would running the Mark III in triode mode make any difference? Especially, would EL34's last longer than they would in pentode mode?
Bob Latino

If you run EL34's in the triode mode in a Mark III you do take about 475-500 volts off pin # 4. By doing so you *may* increase EL34 tube life a little in the Mark III but again the EL34's of today are not designed to look at that kind of voltage for long periods of time. IMHO forcing an EL34 to look at this kind of voltage will shorten tube life. The precursor to the Mark III, the Dynaco Mark II which came out in 1955, did use EL34 output tubes and ran about 460 - 470 VDC on pins 3 and 4 to get about 50 watts per monoblock. When the Mark III came out in 1957 they upped the B+ high voltage to 475 - 480 VDC but, more importantly, they now recommended (and shipped with each amp) KT88 output tubes.

Running in triode, what kind of tube life could you expect in a Mk3 from a KT88, and from an EL34? Are we talking six years? Six months?
Bob Latino

jrethorst wrote:Running in triode, what kind of tube life could you expect in a Mk3 from a KT88, and from an EL34? Are we talking six years? Six months?

It is hard to determine how much time these tubes will last in terms of months or years because we don't know how much they have been used in this time period. "Hours On" is probably a better yardstick with respect to tube life. From what I have seen in my own tube systems is that most output tubes in Dynaco amps when run in pentode ultralinear mode can provide good sound for maybe 2000-3000 hours of playing time. The tube, if it is well made, may last much longer than that but sound quality starts to degrade in a subtle manner. When you run the tube (KT88 or EL34) in triode you only produce 55-60% of the power in pentode so the tube is not being asked to work as hard. As such, it *should* last longer. As to how much longer an output tube will last when run in triode vs. pentode? > I can't really answer that question because I'm not sure. As to your EL34 vs. KT88 question > a KT88 is more durable and will handle higher output than an EL34 and should last longer than an EL34 in any application where both could be used.

What wiring changes are there to run EL34's in a Mk3? In addition, are there other changes in addition to:

to run in triode mode?

How much is a little for the bias?
GP49

In a typical stock Mark III the cathode resistor is 11.2 ohms.

If you want 40mA of current in each tube, which others on this list have recommended for current production EL34, that makes a total of 80mA for two tubes.

Substitute other values of desired idle current and cathode resistor if desired and/or needed. For reference: in the Mark II, Dynaco ran EL34s at 65mA but those were original Mullard tubes that were more rugged and long-lived than current Russian, Eastern Euro and Chinese EL34s. In the Mark III, Dynaco ran 6550s at 70mA.
jrethorst