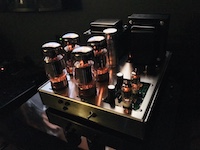 I'll try some tubes first since this is the least invasive approach.

Least expensive would be tubes. The Zeros are somewhat pricey, even raw, which is how I bought them, and then installed into nice stout chassis boxes of my choosing.

Sorry if I missed it, but what preamp are you using? Do you have tone controls? There is no shame in using them if you have them, and I say that as an owner of 10-11 preamps ranging from very good to excellent but not esoteric - with and without tone controls. No intention of starting a tone control discussion with the forum here, but there are good preamps with tone controls that don't kill the sound quality.

I think the treble and bass controls are configurable for the frequency. I'll check that when I get back home. Meanwhile, already ordered tubes that I've wanted to try since they are talked about so much. The resistor swap may or may not happen.
New2Tubez

ttocs wrote:Hi all! I don't think I've posted anything here before since building my M-125 amps more than two years ago, but could be wrong. I've enjoyed all the helpful info gleaned from this forum!

This is something I've thought about from time to time since of owning these great amps but haven't really found any info which would directly answer my question.

Is there any nifty way to lower the Output Impedance such that the amp would be just a little bit happier with low impedance speakers such as the Martin Logan Expression as still sound great? I've compared the frequency response to a Krell multi-channel amp and yes, the Krell has no issue with extending the flat response out to around 16KHz before slumping, but the M-125 slumps around 10KHz (if I remember correctly). I'd like to be able to extend the flat response out farther if that's possible.

Measuring at various output levels the M-125 dutifully doesn't complain by showing any sag in the frequency response when pushed into higher volume, so for me, it's just to see if the frequency response could be extended a bit with these speakers. When connected to "normal" speakers the treble response goes past 20KHz, so the amps are working as they should, but the ML's are just a bit imposing on the amps. I think it says a lot that the Krell also has trouble well before 20KHz.

Started with KT88 tubes, now am using KT120.
I prefer and use the Weber WS1-T rectifier.
I thoroughly enjoy the sound of these amps, I'd just like to see if I can enjoy even more thoroughly-er!

Thanks in advance for any assistance!

Don't know if these would help. I don't have this issue- 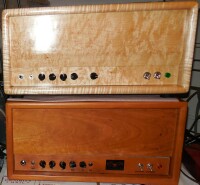 I've never been a fan of using resistive loads on speaker connections to alter impedance. A speaker is a more complex reactive load; using resistors can change the frequency response and take power from the output signal. The autotransformers don't function like resistors.

ttocs; try your tone knob for goodness sake. On my preamps with tone controls, only subtle adjustments are needed unless I'm listening to a really poor recording. You may find the same.

gktamps wrote:I've never been a fan of using resistive loads on speaker connections to alter impedance. A speaker is a more complex reactive load; using resistors can change the frequency response and take power from the output signal. The autotransformers don't function like resistors.

ttocs; try your tone knob for goodness sake. On my preamps with tone controls, only subtle adjustments are needed unless I'm listening to a really poor recording. You may find the same.

Well, it's not a knob unfortunately. The "tone" settings are buried in the Menu.
... and ...
The reason I haven't tried anything for a while now is due to the M-125's not being connected except for a couple tests here and there. There was work going on in the house, rewiring the a/v system to make things neater, so other than some testing some things - other than tube amps - the system really hasn't been fully functional, and the M-125's have been stored on the dining table during this time. Plus, I loaned out my absorbers to a friend because I'm making new ones, yadda, yadda, yadda.

So your friendly scolding is appropriate and well received! I'll be putting the M-125 amps back in action this weekend. And yes, I "do" know to use the Variac to bring up the voltage slowly like I did when I first built the amps.

I've been using the Krell lately, and it's been working better than ever! Krell told me years ago that if channels weren't "active" that they would not negatively affect the working channels, more power to the active channels. That is not correct. I recently pulled the wires internally for two of the channels and kept the first three channels connected. This in and of itself changes the power rating from 150WPC as a 5 channel amp, to 175WPC as a 3 channel amp. The sound is better, smoother, but the big change is a better soundstage which totally gobsmacked me because I never would've thought it would be as good coming from a single amp that's not a dual-mono design. It's not as deep as the tube monos, but it's just as wide, but the imaging is lower which is interesting. A new experience for me.

Since last week I've also been trying out a pair of mono amps from Emotiva which actually work quite well. They are the HC-1 amps that I wanted to try just before I got the M-125's a couple years ago, but they weren't released until late that year and I was totally enamored with the M-125 being an instant success. So now I'm trying them with the Fronts, just to find out, and maybe keep one to power just the Center speaker.
gktamps

by gktamps Yesterday at 2:50 pm

I just read the overview of your processor; apparently the entire signal is going through DSP and a parametric EQ, so it's not like an analog signal chain that has active or passive tone controls - it's already shaped by the design criteria of the digital processing. This is much like active DSP crossovers, so there is really no reason with your processor.

You've found the joy of having multiple different pieces of gear and the ever-evolving tonal and dynamic changes you can experiment with. I can relate!
ttocs

gktamps wrote:I just read the overview of your processor; apparently the entire signal is going through DSP and a parametric EQ, so it's not like an analog signal chain that has active or passive tone controls - it's already shaped by the design criteria of the digital processing. This is much like active DSP crossovers, so there is really no reason with your processor.

You've found the joy of having multiple different pieces of gear and the ever-evolving tonal and dynamic changes you can experiment with. I can relate!

I like that statement "the ever-evolving tonal and dynamic changes you can experiment with". This explains what I'm doing better than I've explained it.

When just watching tv and in a digital audio mode of some type I can see the Tone settings. But when listening to music I've never been able to find it and here's why. From the XMC-2 manual:
"In Reference Stereo Mode:
• The output is always TWO CHANNEL STEREO.
• There is NO bass management, and NOTHING is sent to the subwoofer.
• You CANNOT use the Loudness Control, or the Tone Presets, or the Tone Trims.
• You CANNOT use Dirac Live or the manual Parametric EQ Presets.
• Level Trims, which operate in the analog domain, are still available.
• Speaker Distance adjustments are active for digital inputs but not for analog inputs.
• Stereo analog input signals are passed straight to the Volume Control and the outputs.
• Stereo digital input signals are converted to analog then sent to the Volume Control.
• Surround sound digital signals are decoded, mixed down to stereo (the Center Channel and
LFE signals, if present, are mixed into the stereo output), and converted to analog."

I have yet to be satisfied with Dirac for the Fronts for two channel music, but I do use Dirac for HT, but only up to the XO in the Front L&R speakers. So Dirac just corrects below 300Hz for the woofers.

So using my ears for the main system setup of which settings I prefer to use has been about the best I can do so far with respect to using Ref. Stereo. The L&R are setup as Large, and I use two pair of subwoofers stacked just outside of each Front speaker and a'la Rel type setup. The subs are used as extra woofers and connected via the speaker level connections on the subs. The bass is very well worked out with exception of a dip from 60-70Hz that I use a fifth subwoofer in the back of the room to help smooth out via a miniDSP. The processor isn't involved with any of the bass for these two speaker setups.

So I guess that brings us back to the treble, which again, is not a really big deal. Just looking for a tweak, one or two of which will be tried next week.
gktamps

by gktamps Yesterday at 6:00 pm

Hmm. Well that's unfortunate.
Try the tubes, then consider the autoformers and any other tweaks, but ultimately it would not surprise me if you later feel compelled to have a more pure analog preamp.
Sponsored content