You are not connected. Please login or register
+2
ejc
Bob Latino
6 posters

Someone sent me this photo of a "fake" Chinese 6800 uF @ 50 volt capacitor which was really a 2200 uF @ 35 volts inside. What the Chinese manufacturer did was obtain the outer cases of the larger caps and stuff inside a lower value and lower voltage rated capacitor. From the outside of the cap you would never know what was inside. 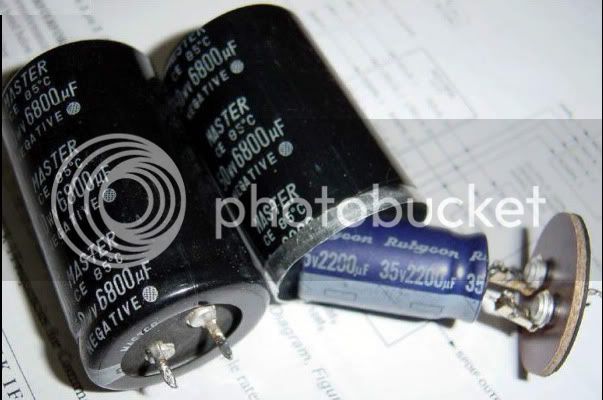 You should see the fake watches the Chinese put out, almost impossible to tell from the real things.

That's really Messed...A lot of Caps like that are used in things like my SS Marantz 1060...
xlr8

Wow! Someone sure went to a heck of a lot of trouble to be downright dishonest and potentially dangerous, I would imagine?

That's a lot of work, for a few cents. Obviously, labor rates are a little different.

This trash is what makes me mad. unfortunately, we can find it on any continent. Scam artists everywhere.

Hopefully they are using these components in their defense programs.
GP49

We, as hobbyists dealing with this kind of part on a one-by-one basis, are not as much "exposed" as the OEM manufacturer who buys this crap by the case and loads it up into his board-stuffing machine. A prior, well-documented example of Taiwanese capacitors with faulty electrolyte (the formula stolen from another manufacturer...except it was a faulty formula) includes tales of many consumer and industrial products which used the bad capacitors. The example I am most familiar with is their use in a popular line of LCD computer monitors. A major technology firm serving clients in the oil industry re-equipped several of their facilities with these LCD monitors. This amounted to hundreds, perhaps over a thousand of them. Over time, about a third have failed and more are failing every day.

Where we can run across this, is when the excess production of parts gets surplussed or sold to retailers. For my parts, I often frequent a local store selling electronic surplus, and often run across bins of "no-name" parts of which I know nothing.
Sponsored content