ST-120 Amplifer owners, are you using the Triode/Pentode switch? I am a new owner of the amp and wonder how other owners use the switches. Triode reduces the power to 32 watts pre channel, the Pentode mode is full power at 60 watts a side. I have noticed in Triode mode that the main transformer runs 20 degress cooler at lower volumes. I assume cooler extends the life of the amp unless you need the higher power. I am curious how and when others use the different modes and the music quality they hear. 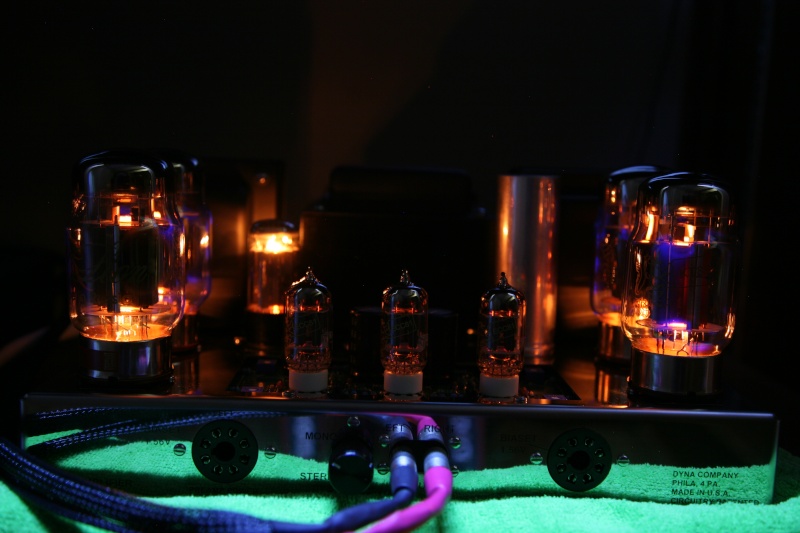 Not that anyone gave it the X1
mantha3

My cable TV service has this "soundscapes" channel... Triode was niiiiiccce for this. inststrumental stuff..

I will listen for the better midrange and slightly forward soundstage in Triode. I noticed the piano is also nice in Triode at lower volume. I like the cooler temps and nice deep soundstage also.

I am going to try a full set of new Tung-Sol KT-120 and 12AT7W's. What is the biais setting for the KT-120's?[/u][/u] Has manyone measured the output wattage per channel with the ST-120 with the Tung-Sol? I assume the swithes will have a similar effect.
mantha3

Nice! Report back. I'd be curious to hear what you think of the KT-120 compared to the Gold Lion KT88.
jdm

Bob,
Is the biais .55 for the Tung-Sol KT-120 tubes? Have you measured the output of the ST-120 amp with these tubes?
Bob Latino

You "could" go higher on the bias on the KT120 tubes in the ST-120 but after careful listening - I don't find that the KT120's sound much better at higher bias levels. The amp will also run a little warmer if you increase the bias.

On the M-125 monoblocks, the use of the KT120 output tubes in place of the Gold Lion KT88's gave about an 8 % increase in power with just the tube change. You won't really notice the power increase IMHO.

The Tung-Sol KT120 tubes, in both the ST-120 and the M-125 monoblocks, sound a little "tubier" than the Gold Lion KT88 tubes with a little more mid-bass content.

Re: Triode/pentode switches. When you switch to the triode mode from the pentode/ultralinear mode the bias will drop very slightly and the amp will have only about 60% of the power of ultralinear. The amp will run a little cooler. Since you can make the switch from ultralinear to triode with the amp running, many audiophiles favor the ultralinear mode because the amp is louder in ultralinear. To really listen to both moder critically I suggest the following > Listen to a track in pentode ultralinear until the track is over. Make the switch to triode and raise the volume on your preamp up to a point that compensates for the loss of volume in triode. Now play the same track over again and decide which sounds best to you. Understand that your musical tastes, your speakers and other factors may favor one mode over the other.