Has anyone tried using an 83 rectifier tube in there st120 amp? Would the 83 tube work ok in the 125 mono block? It would take alittle modification but I hear they are a really heavy duty rectifier. I'm thinking of building a pair of the 125 mono blocks but I really don't want to use the copper caps. I like the tubes. Just wondering if the 83 would be strong enough for it? or is it a bad idea all together? The other thought I had was what if you put in 2 5ar4 tubes in parallel. Would the 125 mono block transformer be able to handle it?
Bob Latino

Using two GZ34's as you suggest would require more space on the chassis and would be no better than the single Weber WZ68. Note that all higher powered (125 watts and above) tube amps all (to my knowledge) use solid state rectifiers due to a tube rectifier's inability to deal with the higher current flows required of larger tube amps.

1. They don't draw filament current like a tube rectifier which saves a few milliamps which would be required to heat the 5 volt filament of the tube rectifier. This makes it easier on the power transformer.

2. They have greater "forward flow" and don't drop the B+ as much as a tube rectifier

The one minor disadvange of a solid state rectifier is the instant application of high voltage because it doesn't have to "warm up" like a tube rectifier. This can be dealt with by simple delay systems (3 to 5 seconds) as built in to the Weber WZ68. You can also consider the VTA TDR (Time Delay Relay) which has a 17 second delay built in before high voltage is applied.

Thanks for the reply

What is a GZ33 and a GZ37 rated for in milliamps again?
mantha3

Below is a comparison of various tube rectifiers ... A GZ33 according to some other info I have here is rated at 250 milliamp current flow without a choke input and 300 milliamps WITH a choke input. 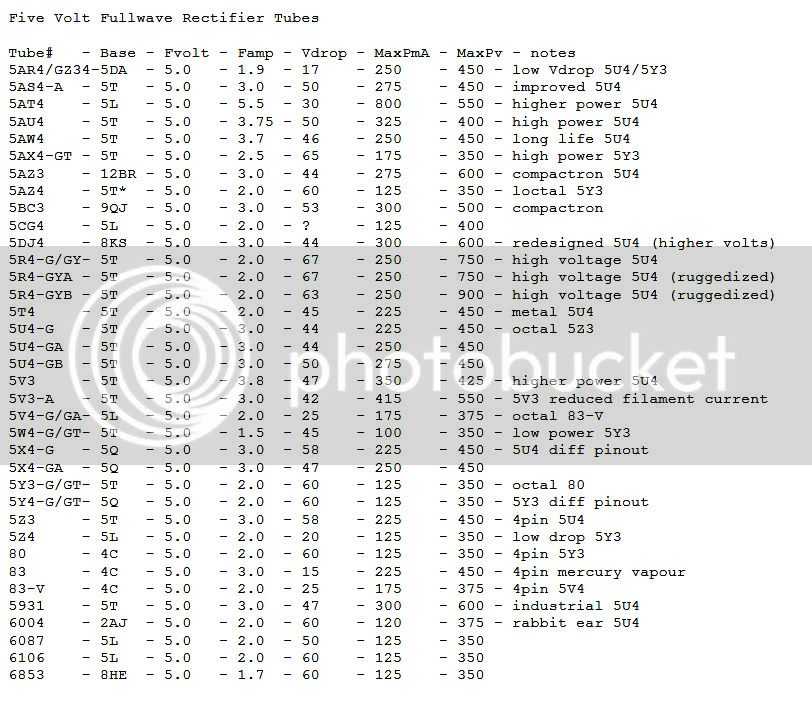 Verry nice comparison chart. Thanks for posting it.
burnedfingers

You could use a damper diode tube in conjunction with the SS rectifier. This will allow you a slow B+ ramp on like a 5AR4 does. Its the best of both worlds in my opinion.
Sponsored content