Hi all, I just recently purchased the ST-70 kit from Triode Electronics. Over all it is a well made kit, I like that it comes with some nice modernizations and uses modern tubes for the preamp that are easy to find replacements for. Unfortunately, I am unable so far to be sure what is wrong with the amp. I am thinking the output transformer on the left side (the side where the rectifier tube and cap board reside) is dead, but before I do any further testing I was hoping to get some ideas from others. This is my first Dynaco amp, but I have built another much easier tube amp kit in the past, it still works perfectly so I didnt get much experience from it, except maintaining my soldering skills!

I have tried all the basic troubleshooting - swapping power tubes between both sides, swapped the EF86 preamp tubes, replaced the middle 12au7 preamp tube, swapped speakers, as well as trying both the 4ohm and 8ohm outputs on the bad side, none of those tests made any difference. I have also gone over the circuit multiple times to make sure it matches their build instructions.

Before attempting to bias the amp, I tested the voltage at pins 3 and 4 of all 4 output tubes and it measured 495V, I noted that the bias points were at 0.31V. I also noticed that if I have speakers hooked up while I am testing voltages, the one on the right side makes a slight pop sound while the left side makes no sound at all from this.

I then tried to bias the amp to see if that would drop the voltage a bit at the output transformers because 495V seemed high, according to Triode it should be between 375V and 475V (I am not sure if this was even a logical troubleshooting step, but I was not sure what else to test). Once I get both sides over 0.9V the fuse will blow every time, but may last a minute or so. Also, when I do both bias pots near or over 0.9V, the bias pots are nearly at their max, so I am not even sure I could make it to 1V if the fuse didn't blow.

I saw that there was some troubleshooting info on this site (which I literally just found this morning!) which I will go over when I get home from work tonight. I will definitely give the output transformer test that Bob posted a try.

Based on the info I provided, am I right in thinking that the output tranny could be bad? Could there be something else wrong? The only other thing I could think of is that maybe there is a short on the bad side that I cannot find?

Thanks for any help!
Greg
natoe

Check out a post that bob put up about the transformers.
and from what i remember make sure you have voltage from one of the el-34 to the board.sorry i forget the pins and where on that board.
gregk

It wasn't the output tranny, or at least it doesnt appear to be...I checked the resistance, I get infinite between any primary and any secondary, 30ohms from the red primary to either blue and 80 ohms from red to either green. I also get 1.1-1.5ohms from black secondary to any other secondary.

If the voltage on pins 3 and 4 of all four output tubes are 495 VDC then that is too high showing that there is no voltage "drop". The voltages on pins 3 and 4 should be in the range of 420 to 450 volts. Check that the two red wires from the ouput transformers are connected AFTER the choke. If the voltage is too high on all 4 output tubes then the main power supply is suspect. The reason being that it is common to both channels.

Personally I am not familiar at all with the Triode kit and you should probably call them directly with any problems you are having with their kit. 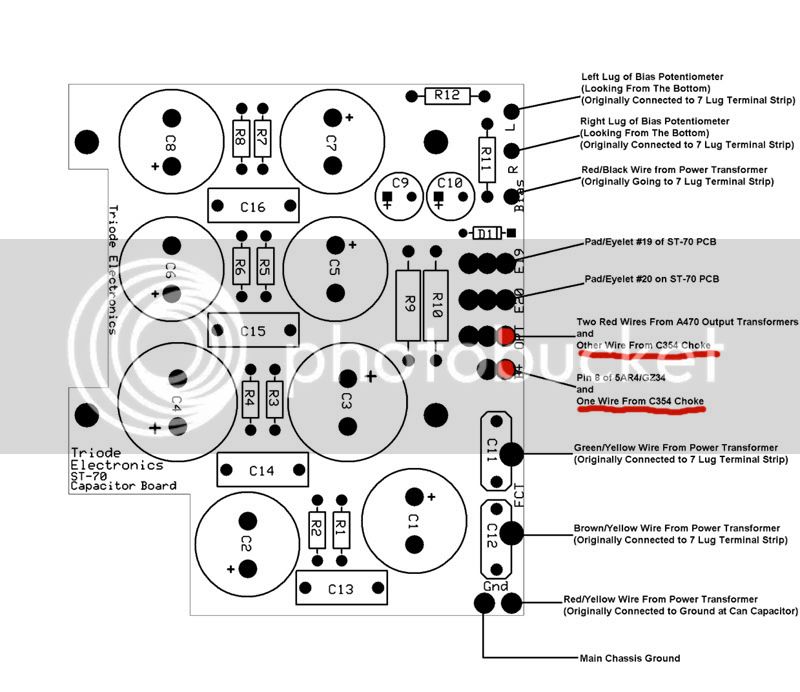 thanks much for taking the time to make suggestions. I checked all those items and everything is fine, I was really hoping that somehow I just mis-wired the output tranny's to the cap board, but they were correct. I also tested the resistors you mentioned, all are close to their expected values (within 100ohms). I am going to contact Triode to see what suggestions they have. Could it be that the choke is going bad? I tested is resistance and it is about 52ohms, which is normal.

Hi all, just a quick update. I did get in touch with Triode on the issue, and the second thing they mentioned was that I might be missing a jump on the driver board to use a 12AU7. I installed the jumper, and confirmed it is not mentioned in the main Triode ST-70 build guide, only in the EF86 driver board guide. Something to be weary of. Both channels run now, but I still cannot bias the amp all the way to 1V (which is what the Triode kit specifies), in face now I cannot get past 0.5V. It was suggested that the fuse should be 3A slo blo, which I know is what an original ST-70 uses. Triode specifies a 2.5A fuse, and I am waiting on them to confirm if the fuse should be 3A in their version or not.

I let the amp run for a few minutes before I tried biasing it - here is a 15 sec exposure of it running: Thanks for the replies!
Greg
wolverine

I have an older board also Greg that probably needs that jumper you mentioned. Can you describe exactly what pins on the board need jumped and under what circumstances they need to be jumped.

I like the spartan look of your rig. Very clean. Did you have that board dipped or did you use some hi-heat auto paint for the black?

Also Greg.....if you replace R11 and R12 with 4.7k resistors in each spot (I'm using 2 watt resistors) and replace the bias pots with 25k or 30k units, then you will have a lot more freedom in the bias adjustment. I have expanded bias in three units and they all run perfectly with EL34's, 6550's, KT88's, KT66's. Be certain to bring the pots to zero before turning on the amp and have your meter hooked up before you begin to bias, the moves needed to obtain 1.20volts on any given side is not a large move on the pots once expanded. I still have not tried the KT77's as of yet, expecting to get to that sooner or later. For now the KT66's sound perfect in my rig and I can't imagine getting any better sound out of my amp.

Another suggestion I could make is the value of the resistors in the R9 and R10 positions. I've used different values there in order to get the 400vdc to the board that I wanted. You can use varying resistor sizes there to either increase or decrease voltage to the bias point on the preamp board..... :}

Thanks for the comments!

You can read all about the jumper in the EF86 board instructions located here:

You will see eyelets J1 and J2 next to the middle tube socket. The jumper is only required to use a 12au7, 12bh7 or ECC99 tube.

It was painted with canned auto paint and no primer, really should have used primer on this one, but it should be fine for now, if it gets scraped up I will tear it down and repaint it later.

Is your amp a Triode clone or just the driver board? I was wondering if you use 3A fuse if its a Triode?

Thanks Greg.....the board I have is not marked and I assume must be some sort of clone board then. I am running a 12AU7 and two EF86's now and all values seem to be correct. The amp runs fine with a 12BH7 also. I think I'll run another voltage check on the board, however it has run fine with no problems for a year or so and there is no jumper in place.

I have two units with chassis that are functional but "not pretty". I am considering either refurbishing those two chassis or even designing my own chassis. Not sure which way I'll go yet....I did a lot of engine painting when I was a young man and the use of primer is not even a question for me when painting metal, it's a must.... :}

So just to post back one more time, I figured out why the fuses kept on blowing. The problem was related to a bad GZ-34 rectifier. I put a Sovtek in there and now I am able to bias the amp up to 1V (what Triode recommends for their ST-70). It runs great now. The one other mod I did based on several folks recommendations was adding 1000V diodes in series with the rectifier plates (pins 4 and 6). This supposedly prevents arcing and helps the recto tube last longer (I searched all over to confirm this and it appears to be true.) I used 1N4007 diodes.

thanks for the help from folks on here!
Greg
Sponsored content