I was recently familiar with mcintosh pre c2300 with mc275V. and JBL4312SE (91db)
I was thinking about selling my MC system.

I read about mid freq and high freq (st120 vs mc275). Could someone talk about the low frequency ?
MC275V have a very deep bass.

Im sorry for my english !, matias from Argentina.
Peter W. 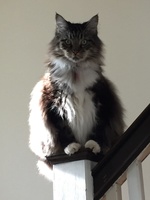 Your English is fine!

As to the JBL speakers:

They are moderately efficient at 90dB @ 1 watt @ 1 meter. That is a good thing, as all the options you suggest are moderately powered with the McIntosh being the most powerful at 75 wpc. We will get into Damping Factor shortly.

a)  You have not expressed the size of your listening area. This is important as it materially affects the power requirements to achieve acceptable volumes. But for the moment, I am going to assume a moderate listening area of perhaps 4 meters by 6 meters by 3 meters high, with standard finishes.

b)  The type of music you prefer will also be a factor. Full orchestra signal requires substantially more power than just a few instruments (unless one is an organ), or the human voice at the same volume. NOTE: a system capable of producing full orchestras will do voice and small ensembles very well. Not necessarily the other way around - consider SET systems as a perfect example of why that is.

c)  The volume you prefer, quite obviously, is the single largest determining factor overall. If you wish to reproduce the Saint-Saens Organ Symphony at near-realistic volume, that is an entirely different proposition than Gregorian Chant, or a solo female voice.

Headroom is key, although far less critical with tube equipment than with (most) solid-state equipment as clipping is much softer with tubes. And the Damping Factor (how well the amplifier "stops" the voice-coils from overshoot) is absolutely critical to the low end.

Putting it all together:

The VTA family and the OEM ST70 have damping factors around 15. With the VTA family having considerable "improvements" to the circuitry in addition. The McIntosh has a damping factor of >22. 50% higher. The higher the damping factor, the tighter (less flabby/tubby) the bass will be. And with the speakers you specify (down 6dB @ 40 HZ) the McIntosh will definitely give you superior bass. Were these your original L100s, that difference would be quite substantial. With the 4312, noticeable but not quite as much.  As the McIntosh has more than twice the power than the 70, and a bit more than the VTA ST120, and you have it already in hand, I suggest you stay with it. It is not "twice as loud", but the headroom on transients is much greater and will open up your signal much more than the 70 would.

The ST120 is a nominal 60 wpc with the KT88. I am not so sure you would realize any improvement, and, at least in terms of bass response, it would be a (small) step backwards.
Pillo69

Pentode/Triode - damping will still be very low. And your bass will be flabby/tubby/loose.

Either stick with the McIntosh (especially with JBL speakers), or move on to Solid State. Those amps will have generally very high damping factors.
Dogstar

I’d go with the ST-120. A little more in cost but worth it. The ST-120 allows you more freedom for speaker choices and maybe let’s you use the speakers you currently have in a larger room in the future.
Peter W.

Dogstar wrote:I’d go with the ST-120. A little more in cost but worth it. The ST-120 allows you more freedom for speaker choices and maybe let’s you use the speakers you currently have in a larger room in the future.

Not to pick nits, but unless I misunderstood the OP entirely, the incumbent amp is a McIntosh 75 wpc amp with a damping factor of >22. Replacing it with a ST120 would be a step backwards, albeit a very small one.

Keep in mind, also, that JBL speakers as a class tend to be bass-heavy, AKA "California Sound". So using tubes is somewhat of a risk, striving for the highest damping factor available helps mitigate that risk.

In that case, the ST120 will be very close to the MC275-V in performance, as 15 watts at that level, and against those speakers will have minimum impact.

Certainly, were you to sell the McIntosh components at the going rate, that would allow you to purchase a pair of M125s, which would be a substantial improvement over the 275.

And a VTA pre-amp with all the bells and whistles.
mati1979

In that case, the ST120 will be very close to the MC275-V in performance, as 15 watts at that level, and against those speakers will have minimum impact.

Certainly, were you to sell the McIntosh components at the going rate, that would allow you to purchase a pair of M125s, which would be a substantial improvement over the 275.

And a VTA pre-amp with all the bells and whistles.

yes, i like vta pre amp. But i see, not have control tone. Bass treble.
Peter W.

For the record, I am a believer in active pre-amps. At present, I own six different units (some multiples of some in addition), being:

The 3X is a fine pre-amp, and with a bit of tweaking holds its own against anything available today at many times the cost. In audio circles, this is considered heretical as the PAS series is very nearly universally reviled, with its tone controls (and tone controls in general) being a significant first-cause of the revulsion.

Of the entire range, the Revox A720 is, in my opinion, the most musical of the bunch.

The McIntosh C2300, on the other hand, is at a different class and level than all of the above - with the possible exception of the Revox - which is solid-state. And the C2300 is perfectly compatible with the VTA family of amps. Stay with it!
Bob Latino

I have had a few people directly compare the VTA ST-120 with the McIntosh MC-275 and the ST-120 compares very well for about 1/4 the price of the McIntosh MC275. Below are two such comparisons. Read them and make your own conclusions. If you have any questions about the reviews, Email or IM the two people. 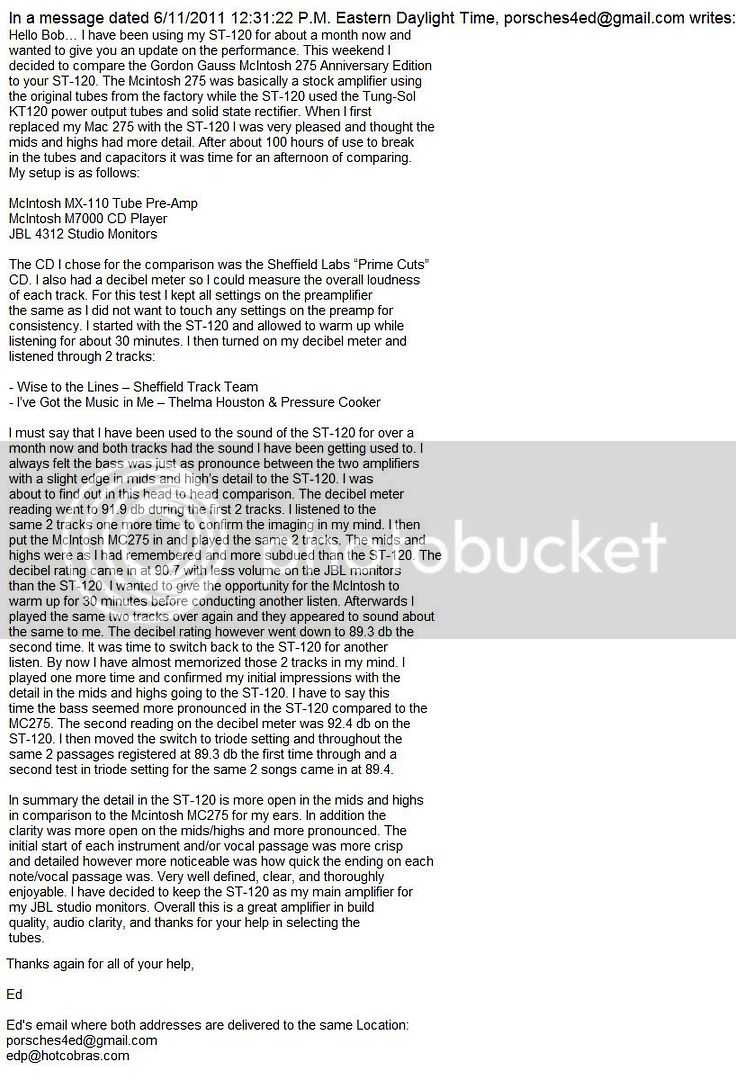 Link below on another such comparison.

However the ST70 with a Pioneer HPM100 speakers have a better response.
Being designed by the same person the HPM100 and the JBL (Bart Locanthi), the answer is different.
The problem may not be the amplifier, if not the speakers.
Peter W.

It might be helpful, if Bob permits, at this moment to go a bit into Speaker History, with specific reference to that class of speakers loosely described as “Bookshelf”.

Back in the days of yore, speakers were largely not in any sort of formal Box, but typically mounted in a panel that may or may not be stand-alone, and had little or no ‘design’ to it other than, perhaps, aesthetics. Not all, of course, but most.

Along comes Edgar Vilchur and “Acoustic Suspension”. Now, we have small box capable of extended bass performance. Over time Vilchur (and his company, Acoustic Research) developed and introduced multiple-driver speakers with actual (passive) crossovers and other refinements. Rapidly, AR spun off competitors, who, in turn spun off yet more. And as most of these stayed in the Eastern Massachusetts area, this class of speakers tended to sound close to the same – and became the “Boston Sound”.

JBL and others, almost simultaneously, started to develop competing designs that were not sealed boxes, but were approximately the physical size. And, being both smart and intelligent competitors (not hardly the same thing), they played on the inherent weakness of acoustic suspension designs, being that they are power-hungry, and further exploiting the increasing use of dome mid and tweet drivers – also requiring more power than conventional designs. JBL, Cerwin-Vega, and others, then all California-based, developed this line in direct competition to AR, KLH, Advent, Boston Acoustics, etc. And, became the "California Sound".

The typical Acoustic Suspension speaker was inefficient (86 dB to as low as 78 dB), had a relatively smooth frequency response, dropping off sharply outside the design range, and were relatively small for the performance they gave. They also tended to have a very wide sound-stage due to the common use of domed drivers.

The typical competing design (AKA “Ported” for now) was much more efficient (90 dB+), a tad larger for the same frequency range, tended to be bass and treble-heavy with relatively reduced mid-range, and by avoiding domes for the most part, concentrated their sound within a relatively narrow cone. The roll-off at the extremes also tended to be far less sharp.

Now, Damping Factor and why it I focused on it in this discussion:  A speaker that is bass-heavy will have an exaggerated response to the damping factor of any given amp. Now, let’s demonstrate exactly what it is – and this will take some small effort on a reader’s part:
• Obtain a small battery-powered electric motor such as would be used for a model car or boat.
• Spin that motor with your fingers. Note that it spins fairly easily.
• Now, short the battery connections to each other. Note that the motor becomes much harder to spin. Those of you old enough to remember slot-cars remember that this is how they braked.
• This same phenomenon is how the damping factor works on speakers.

The OP did mention being unhappy with the bass response on the (OEM) ST70.

With a total spread of 6dB, not a whole lot, and with a given complaint about poor bass response, and with the inherent design of the speakers cited being relatively bass-heavy, I still suggest that the OP should consider Damping Factor in his choices moving forward. All other things being equal, the next consideration would be headroom for transient response.

With the choices offered from the VTA family being the 70 and the 120, and the incumbent being an older-model McIntosh MC275, the 120 is a better choice than the 70, neither is as powerful as the 275. BUT, given the exaggerated resale value of the 275, this situation is crying out for dual M125s. Which was not mentioned initially, and would be an improvement over all the other options at every level.

This on the essential given that the OP wants tubes, not solid-state.
corndog71

Another option for better bass is to add a good subwoofer.
Peter W.

corndog71 wrote:Another option for better bass is to add a good subwoofer.

I am not so sure a sub-woofer would help. The JBLs noted are OK for bass - they may not be responding well to the amp.

There are a lot of unknown factors here - such as the size of the listening area, the volume and signal preferences of the OP (we have established that he likes tone controls) and other factors such that we are largely guessing.
jimzim429

JBL produced quality loudspeakers that suffered from accurate and deep bass and needed to be 'toned down' with tube or quality ss amplifiers. I had a pair of L-100's in the early 70's and could only use a Dynaco ST-70 or Marantz Model 15 to power them. Other amplifiers or receivers sounded like crap. I purchased an Onkyo A-10 integrated amp around 1977 and that really made them sing and had the first active MC phono input for me to use! I put the Denon transformer away for only a day or two.  What an amazing passive little box...
Sponsored content