I'm new to the tube world and would like to get some advice on selecting a small variety of tubes to play around with.
It's my goal to get a small selection of different tubes that will give me an idea of the basic differences in tubes and their sonic character so that I can educate myself in what basic characteristics in a tube I prefer. I would like to stay with tubes that are not astronomically expensive in the beginning. something like the Gold Lion KT88's would probably be the most expensive I would like to go initially, at least until I get an idea of what direction I will go.
I have heard tubes in the past that had a distinctly 'fuzzy' sound, they reminded me of the old style fuzz boxes some classic rock bands used years ago. I would prefer to stay away from that if possible otherwise I'm open to experimentation.
Oh yea ....
Tubes that go up in flames within a few days or weeks are not especially appealing to me either, even if they sound great. (grin)

I have one of the first three kits Bob produced of his VTA ST120(July 2008). New issue power tubes seem to be the least reliable. I am on my fourth set of KT88's, having auditioned "Gold Lion", "JJ", "Elektroharmonics", and now "Penta Labs". The first three sets lasted a combined time of about 18 months. The Penta Labs KT88's have completed the time to date. They all had exceptional sound in VTA ST120. One side note is the Elektroharmonics were "cryogenically" treated, however I was not able to discern any advantage in audio quality. So far the Penta Labs KT88SC's from "Dougstubes.com" have pleased me the most. They are manufactured by Shuguang of China and imported by Penta Labs. They are of solid plate construction, not the three hole type.

The driver tubes presently in use are Mullard CV4024. I have a set of Phillips 12AT7 that I used initially. They are quite satisfactory, however the Mullards seem to make better music.

Also I am of the older school, and utilize all tube operation, no solid state rectification, so I have not tried KT120's.

Hope that you have good luck in your search for the optimum tubes.

Thanks ArlanB,
I seem to get less than a consensus on what is best for power tubes. Just as you said, reliability and sound quality seem to be a rare (possibly non-existent combination) these days unless megabucks are spent on NOS. A bit discouraging but I do not give up easily. Seems to be a common theme with tube lovers. LOL
The Mullard CV4024 are almost an exception. Most like them and most consider them reliable. I probably need to go ahead and latch on to a set of those. I'm almost in the comfort zone in that regard.
I thank you for sharing your experience with power tubes as well. I haven't investigated that particular one yet but I will now.

I did go ahead and order the delay board with the amplifier in the (probably futile) hope it would extend tube life.
mantha3

Man it can get out of control. Have fun!
davidness

I have an ST-120, and bought about $1000 worth of tubes for tube rolling. In the end, the best were the Mullard CV4024's, and making very little difference were the output tubes; I generally use the Gold Lion re-issue KT88's, but have no problems using whatever I have on hand.

Mantha3 - I haven't been into trouble in a long time - I'm past due. LOL

davidness - Wow $1K, that's a fair chunk of change for me these days. I'm probably going to latch onto some CV4024's.
You indicated that you usually use Gold Lions, have you tried the ST-120's? I may go ahead and get one additional set of outputs as well. In part to have a backup set and in part to experiment.

I have not been on this forum.

KT88 - I have a Quad of both Shuguang Treasure and the re-issue Gold Lions... Both excellent and I can' really say one is better then the other.

Siemens 12AT7 that I run front and center. Best IMHO. Mullard CV4024 Right and Left.. Excellent. I also have some Raytheon 12AT7 and the Phillips JAN.. Some new production firecrackers.

Tubes that sound fantastic that can be cheap on the VTA High Gain:
--Clear top GE 5965. Industrail and great. These have a little less gain then a 12AT7.
--7062 I have a pair of AMPEREX 7062 that I run Right and Left.. Sound great. Hard to hear a difference from these to the Mullards. These tubes also have slightly less gain then a 12AT7. These stand about a half inch taller then a 12AT7. Industrial 10,000 hour life by claim.

Check prices on 5965 and 7062.. Brent Jesse recording or EPay. Fun stuff that sounds great. These kind of look cool too with the clear top or taller tube.

I got out of my mind with the rectifiers...
Two Big Bottle Mallard GZ37... Built like tanks! Fun to just hold up to a light and look at me. Engineering beauty really. I got a second worring about how I'd bum if I lost the 1st.

A regular GZ37 from Langrex (UK EPAY).. You may want to get one. Work great in place of a GZ34

PS - All GZ37s won't fit under the tube cage

Then I got a pair of Sylvania GZ34 Big Bottle...

All this stuff sold to me as NOS.

I have had the Gold Lions kt-88 and the Tung-Sol KT-120 THE GOLDLIONS NEVER LASTED MORE THEN THREE TO FOUR MONTHS. They sounded great but the Tung-Sol sounds just as good to me and have bin going for more then a year of long hard hours.

Lucky me. Put away thirty GE 6550s when I could get 'em for $8 apiece. At the time I had no amplifiers that used the 6550; all of mine were EL34 amps. But the way things are going, I should look upon them as a nest egg, or at least a down payment on a good used car.

Look for people throwing out stuff on the curb. Seriously, I know some people who have picked up Mullard GZ34's from discarded junk. Usually a rebrand of a manufacturer.

Otherwise, I have a pile of TV tubes I got in a tube caddy if you just want some to "collect". Make a deal......

For power tubes, look at the Russian ones, search here, we have discused it a lot. I like them a lot. Mine were made in the late 70's. There is a Russian seller on Epay, and Jim McShane offers burned in and tested ones.

For AT7's, I happened to pick up a sleeve of Sylvania's that sound really good to me, for not much money either. Sometimes you can get lucky.

Thanks for all the advice and feedback.
I've been busy working on the st120 so apologies foe being slow to respond.
I got to the part where I was to check/set the bias on the 120' for the left channel and ran into a problem. The fuse blew - oops! It ran a few seconds before did.
I rechecked the items listed in the instructions and all was well. I can't verify the tubes since I don't have a tester right now. I went back and rechecked everything from start to end - all looks fine. I guess I'll be giving Bob a call to see if he can assist.

Tube collections sorta happen quite by accident. Six months ago I owned none. Today... Well... 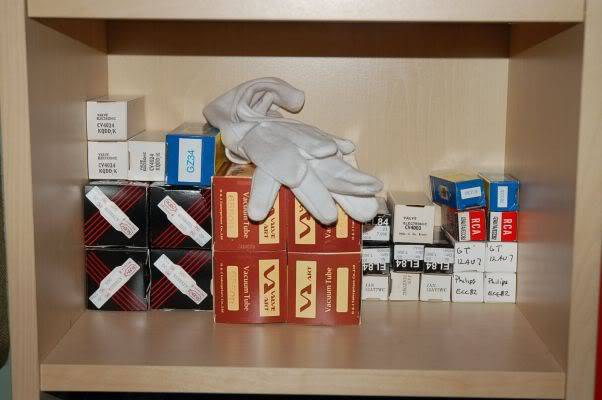 Very nice jhoak -
They even have their own cubical.
baddog1946

Hi All:
This question is mainly for Bob:
Is there any way to attach a PDF file to a posting? I have a PDF copy of a short (12.5 MB) but informative book called "Getting the most out of vacuum tubes" by Bob Tomer that could add to the interesting dialogue on tube pieces on the forum right now.
Unfortunately it was given to me on a CD so I don't have a web address that it can be viewed on.
Maybe I can send it to Bob and he can put it up on the sticky section with all the other PDF's. It is definitely worth the read covers it all on tubes and their care and maintenance and good reference material for any "tuber.
Thanks
Baddog1946

Getting the Most Out of Vacuum Tubes