In the section of photographs you can see my ST70 amplifier.
I bought some Sprague Orange Drop capacitors to replace those brought my amp, before deciding to place jumped the fuse, I opened the bottom cover of the amplifier and detected the tracks of the PCB were detached from the plate and some about to split, I decided make a new plate and replace all components, thinking it could have been a short break and cause the fuse.
With the new board and put it into operation again to jump the fuse. I took tensions and apparently everything is correct.
With the valves 7199 and GZ34 rectifier does not pop the fuse, I detected a failure in the rectifier tube I replaced and rectifier diode (1N4007) and two capacitors 47uF-100V.
The amplifier works again, but one day after the fuse blows again.
The Choke is wax on the outside support, so I'm hoping to send a new Kevin (Dynakitparts) because I think it can ocaasionar shorts.
The filter capacitor gives me the following measures with 200k scale:
- Semicircle --- 185.9
- Square ---- 159.6
- Triangle ----- 179.1
- No mark ---- 185.0

Thanks again for your attention.

just to make sure I'm understanding you correctly, you are using a 240v to 120v converter, but you are actually getting around 130vac input to the amp? That's too high. You may need to use a variac.
Also it's difficult to tell from the info you gave, but I would guess your quad capacitor is bad, especially if that input voltage is too high. Max DC voltage on that quad cap would be around 480-500v right at startup, then drift down to around 420-430v after about 30 seconds. New quad caps are rated at 550v rather than the old 525v.
Pillo69

The problem has been solved by replacing the capacitor quad, I put the new F&T 550V. and uf 80-40-30-20., I've also changed the four output tubes EL-34 with new HD. Everything went great until about 100 hours of use. At this time I detected a change in the volume, falling at once and do not even have the same balance the two channels. I changed the connectors on the previous CD to Aux. and continues to do, I tried the tape deck and so does.
A that can occur?.
A greeting.

I found the problem, replace the selenium rectifier with a diode rectifier (1N4007), I caused a mismatch of bias that following the recommendations of the forum I solved including resistors 10 and 20K in seven terminal strip. Now my Dynaco has returned to its full splendor.
Take this opportunity to announce the purchase of a PAS-3 preamp which I hope is the perfect complement to my amp.
A salute to the comrades.
Pillo69

As mentioned earlier I purchased a PAS preamp.
I've changed the front plate and buttons for a black version and the selenium rectifier diodes changed by two 1N4007 (amending Curcio-audio).
I've also changed the capacitors and resistors as I read in a thread for the RIAA Bob.
But .... I have a problem, when I use the phone function PAS (turntables), after a half hour of use, the ST70 BIAS begins to raise a lot, which does not occur when using the line function (cd) of PAS.
You know you what could it be?
A greeting.
José 1. all the components in the bias system
2. the rectifier tube
3. the output tubes
4. your line voltage

replace the resistors and the capacitors in the bias circuit, they are probably changing value as the amp heats up and thus changing the bias voltage.
Also change the four 270K resistors on the far left and right side of the board, replace with 220K resistors. 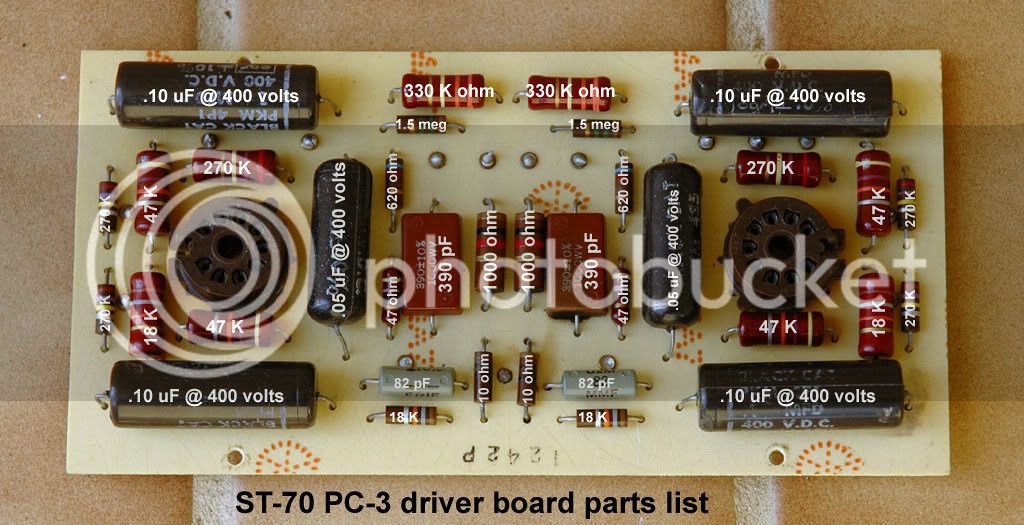