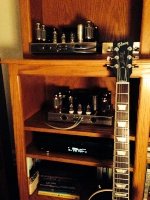 Easter vacation in the Florida Keys and we're listening to a band while the tropical breezes blew. The place is called Mangrove Mama's. We've been there about an hour when I notice that the guitar player is plugged into what looks a lot like an ST70. This guy can play but why would a guitar be driven by an ST70? When the band took a break I asked him about his amp. Not only is it an ST70, but when I mentioned that I've built two of them he asks if I've ever used a VTA board. Both of my ST70 builds used VTA boards so we talked about the caps we used, new or original chassis, transformers, and even the cage, but mostly how he converted his into a guitar amp. Anyway, I thought that was pretty cool and worth sharing.

About 3 - 4 years ago, I did have someone from Florida purchase an VTA ST-70 kit and tell me that he was going to use it as a guitar amp. His first name was "Jon". I wonder if it is the same guy that you met ?

Could be. It was from a full kit including chassis and cover. He was only using the right side of the amp, and he had added a 1M pot on the feedback. He gave me a little demo of its affect. It really ramped up the volume, but the sound got a little "hairy".
Sponsored content