A few years ago, Mark Knopfler took a bunch of his Dire Straits money and built British Grove Studios. Albums produced here sound fantastic on the ST-70. One of the best is "Kill to get Crimson" by Mark. It was engineered by Chuck Ainlay, who is in the video. This place is second only to sKiZo in terms of equipment and complexity!

My system is positively "Purist" compared to what it used to be! 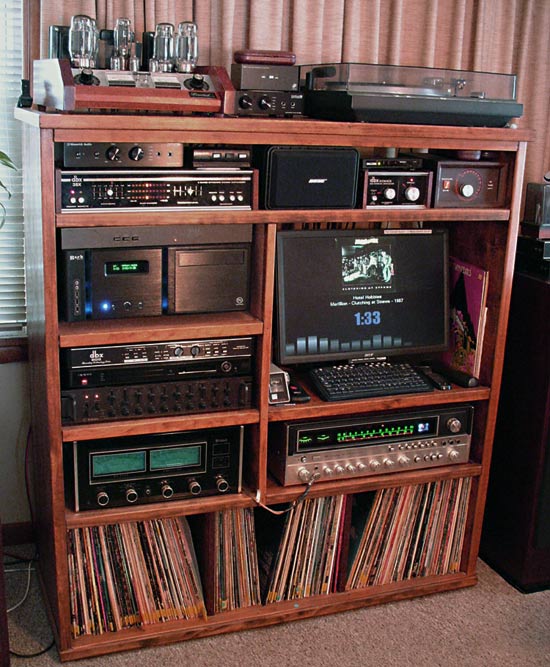 Here's the other end of the spectrum for recycled studios. Hi Style, down Chicago way, spent a LOT of time and effort putting their's together. Worth it for the classic sound though. Killer video here showing it in action  ... those bass strings are ... mesmerizing ...

I always appreciate well engineered music. One of my favorites is Alan Parson's quad version of Pink Floyd's DSOTM. Parson's recorded the original album in quad, and it sounds great on a 4.1 tube system. I use a ST-70 for the fronts, and a 1962 RCA 8W SE for the rears, plus a 120W Veledyne for the sub. Using a Onkyo 787 as a 4.1 preamp. The surround sound effect is very impressive!
sKiZo

That's a project on the to do list - going with a tube back end. The Sansui QRX has some real tasty amps for solid state, but I've got a hankering to go all tube here. Rear channels don't need all that much power as I'm just running bookshelves there and get more than enough bass from the big boxes on the front. I also don't need much power as they're only about four feet from the big comfy chair.

* Actually running "sexophonic" sound here. There's two sets of satellites plugged into a Dynaco Quadraptor, and that's driven off the rear outputs of the Sansui. One speaker set is overhead and slightly behind, and the other directly to the sides for killer depth of field. I mostly just leave the Sansui on SQ and get some real nice surround off stereo material. I've got quite a few QS and SQ albums, as well as a few CD4's - Real quad sounds nice too.

Maybe a Dek ZKit ... you can run three mono block boards off one power transformer ... That way I'd also have power for a center channel off my Oppo SACD. around $400. Those are rated at 2wpc and get real good reviews. You can still find old tube stereo consoles at thrift stores and craigslist. Some of the thrift stores will let you salvage the amp, and leave the carcass behind. I found a 1962 RCA console with a RS199 EL84 SE amp, that was very easy to re-cap and repair. RCA made a 8W SE, and a 16W push-pull. 8W seems to work perfect for me as back speakers. The only problem I have, is that the little class A RCA sounds better to me, than the Dynaco!
deepee99

My system is positively "Purist" compared to what it used to be!

Here's the other end of the spectrum for recycled studios. Hi Style, down Chicago way, spent a LOT of time and effort putting their's together. Worth it for the classic sound though. Killer video here showing it in action  ... those bass strings are ... mesmerizing ...

Skiz, I pulled McPherson down when you first posted it. Great tune,great video, bought the vinyl, it's actually better in digitable formulation than on the turntable. I think you have to see those bass strings.

Since we're re-posting stuff, I like the New Jersey sound better than the Chicago Sound, to wit: