The power supply uses the uTracer is a power transformer 19v laptop computer.

I'll leave some bananas to connect an external power supply, it will be necessary for valves and low voltage high amperage.
Pillo69

Peterh, how to solve the amplification (mu) of a high-gain pentode ??. 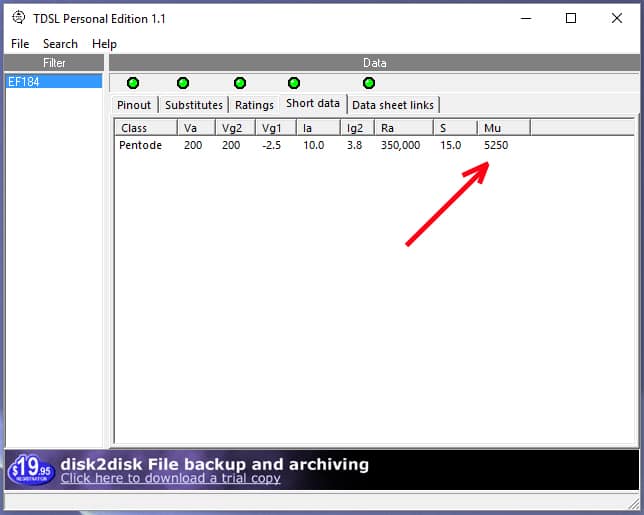 Pillo69 wrote:Peterh, how to solve the amplification (mu) of a high-gain pentode ??.

Is it the TDSL app that limits mu ?
Then file a bug. 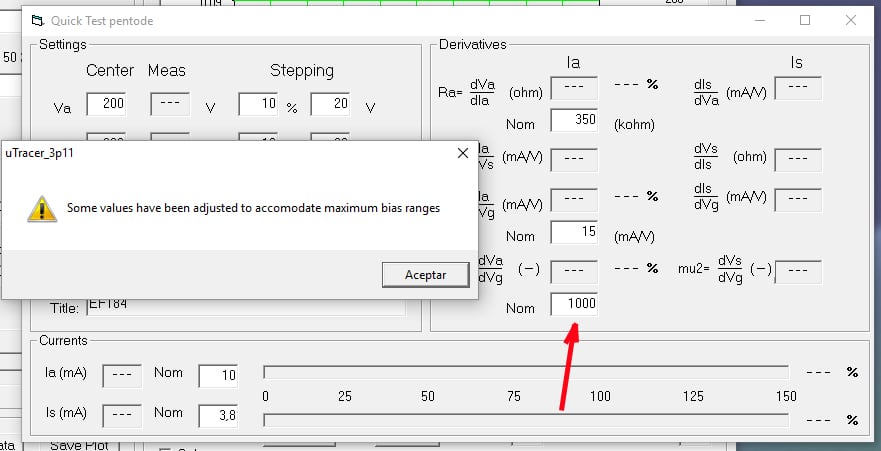 I'm not sure here, but leave them as zero and  see what values are measured
when actually measuring a tube. You might have a scaling issue.

mu for a pentode is a "fuzze value" anyway, just like it's Ra.
Pillo69

Anyway I checked other valves in Datahet and "mu" value is the amplification factor.
For example 12AX7 the "mu" value is 100.
Therefore in EF184 the "mu" value should be 60 (according Datashet), not 5250 as indicated TDSL.
It must be an error in the TDSL program.
peterh

Pillo69 wrote:Anyway I checked other valves in Datahet and "mu" value is the amplification factor.
For example 12AX7 the "mu" value is 100.
Therefore in EF184 the "mu" value should be 60 (according Datashet), not 5250 as indicated TDSL.
It must be an error in the TDSL program.

It was a "scaling error then".
mu is a value that depends on working conditions as well as the tube under test, thus mentioning mu without mentioning other conditions is of little value.

The above uTracer menue is used to establish a baseline value for a tube, and when choosing the conditions to measure this i would suggest looking in the tubemakers own documentation, both to get a suggestion of working point and also to get typical values of the tubes performance.
https://frank.pocnet.net/sheets/010/e/EF184.pdf is one such source, scroll down to "Typical characteristics" and use the values as initial conditions for the quick test.
The results of the quick test ( Ra, Gm and mu ) should then be compared to the measured values ( 380kohm, 15mA/V and 60 )

Note that tubes are mechanical animals with large tolerances ( +-20% is not uncommon ), this was the designers "of the day" aware of and made the designs
in a way that the tolerances were unimportant and did not affect the amps performance. The general exception is matching tubes used in push-pull applications.
Peter W.

Well... and a simple answer may not be so.

A well made GM tester does many things well, but, yes, it does not trace curves, agreed. Nor, for a fact, do most audio applications require curves to be traced. A typical audio tube is far too crude a device for to be of much benefit. The best analogy that applies is a choke on a shotgun. One will never get the spread down to to the diameter of the barrel, one might get it to scatter a bit less over a short range, but a shotgun remains a shotgun.

I keep a Hickok 539B, a lab-grade tester that I obtained (legitimately) from the GE Re-entry Systems Division in Philadelphia some time after they closed their doors, fully calibrated, and with a set of calibration tubes as well. Using external meters, I can test for plate current, filament current and voltage, set specific bias voltages and thereby actually "match" tubes. No, again, I cannot trace a performance curve. But, the 539B is a fine tester, and within the universe of commercially manufactured units from back in the day, is surpassed only by (and perhaps) the AVO testers from England, and its newer brother, the 539C. No chips, of course. BUT, I have solid-state rectifiers in place, explicitly necessary for the 83 mercury rectifier not rated to be used horizontally, and also notoriously unreliable. The 5Y3 is a bit more reliable, but replacing it with a SS device is simple and certain.

But, within the broad range of tubes free of basic failures (shorts, gas, saturated cathodes and such, all of which would be manifest on a good tester), the best test for any given tube is the equipment it is in.

I am by no means a Luddite, and I see great appeal  in a curve tester such that if I were to be designing new tube equipment such would be in my equipment inventory. But, I do not. I keep several dozen tube devices, mostly vintage radios, but also two complete tube-based audio systems including a Scott LK150. Nothing exotic however. None of it requires screening tubes with the precision that a curve-tracer would offer. 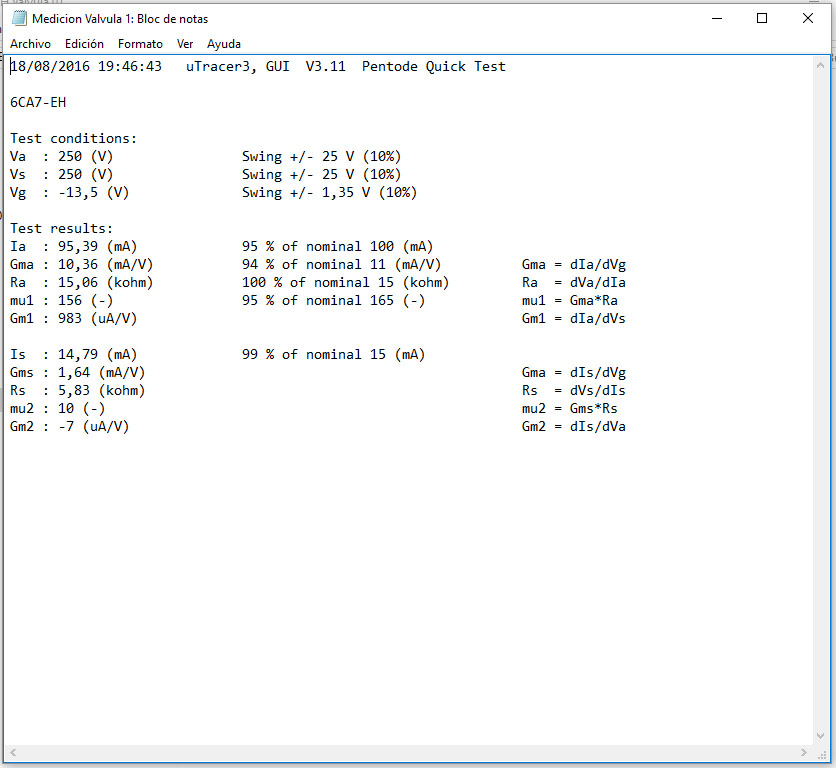 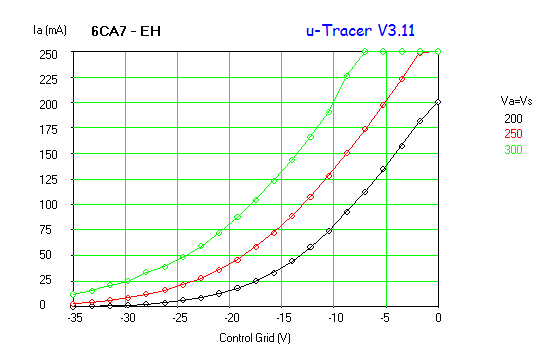 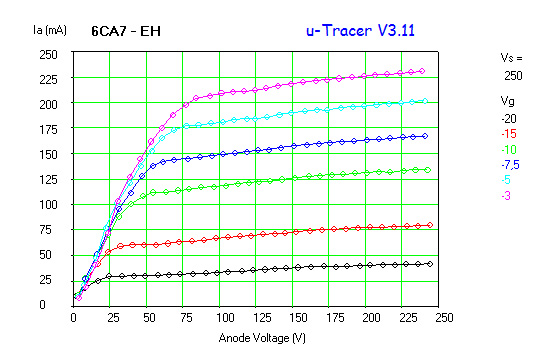 I am a newbie. So I take that test results > 90% are good. This is for one tube only. Correct? Can you share your thoughts as to what is the take away from these results.

On a separate note, I tried the EH 6CA7 (big bottle) and was impressed by the sonic quality. Unfortunately, I could not bias my amp (ST-70) higher. It was on the cold side, but I am most certain it had nothing to do with the tube, but more of my setup. I can only imagine if this tube bias right how much better it would sound.

Thanks for sharing.
Pillo69

It is a test on a single tube of a quartet purchased in 2011.
ST 70 amplifier is used daily. The hours of operation are greater than 2000 hours.
Sponsored content