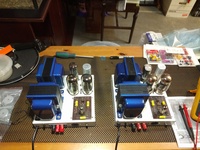 I am currently finishing a basic rebuild of my 2nd ST-70 (capacitors, connectors, power cord, etc.), then want to make jumpers (as required) and run the two amps with my rebuilt maggies MGII.

I have identical Sovtek 7199 Russian tubes in both, and identical Mullard EL34 reissue power tubes.

P.S. Oh yeah, if it matters, the preamp is the Dynaco PAS-3.

You're better off with two Mark III.

You may even be better off with one Stereo 70 in its normal stereo mode. Paralleling the channels of a Stereo 70 is a poor idea and never really worked. You'd be mixing the negative feedback signals of the two channels. Since the feedback is intended to correct nonlinearities in the amplifier, and since those nonlinearities will, despite all best efforts, be different between the two channels, what you're creating is a hodgepodge of distortion correction that doesn't match what it's intended to correct. Remember that the Stereo 70 or any other amplifier will AMPLIFY the DIFFERENCE between the input signal and the output signal (correcting for differences in amplitude only), so if a channel sees its own errors due to nonlinearity, PLUS those of the OTHER channel, it will amplify the errors in the other channel, not correct them. Add to that the marginal capacity of the Stereo 70 power supply and the in-phase operation of the two paralleled channels in mono that stresses it a bit more than regular stereo operation where the two channels do not play exactly the same sounds.

On the test bench, where an actual Stereo 70 will put out a real 28-30 watts per channel with both channels driven, the paralleled mono connection yields only about 40 watts mono and at measureably higher distortion..

The only CORRECT way to run a Stereo 70 in mono is to bridge it. Run the two channels OUT OF PHASE and connect the loudspeaker between the two hot terminals, i.e., between the eight-ohm taps on the two channels, without the ground connection. This connection does more than just double the output wattage. For example, at a ten-volt swing on each channel, a standard Stereo 70 is putting out 12.5 watts per channel into eight ohms. Paralleling the two channels theoretically yields double that, 25 watts. Bridging the Stereo 70 and running it at the same ten-volt swing on each channel yields a twenty-volt swing overall, or fifty watts mono into eight ohms. The same relationship applies up and down the power scale, to the point where the theoretical 35 wpc maximum output on a Stereo 70, which at eight ohms is a 16.7 volt swing, will yield 140 watts mono.

Additional circuitry is required to invert the phase on one channel to do this, and that circuitry has to be very well designed...as good as the amplifier itself.

If your Magnepan MG-2 speakers have dual inputs (separate woofer and tweeter inputs) then you should biamp with one ST-70 on each speaker. Run one ST-70's left channel into the woofer and the right channel of the same amp into the tweeter section of the same speaker. Do the same thing with another ST-70 amp on the other speaker.

I agree with everything that GP49 has said about running an ST-70 in mono. It just doesn't work out right for the many reasons he has mentioned.

The one thing that he did mention that is partly correct is that a STOCK ST-70 will never make it's specifications with the stock power transformer, stock DC B+ power storage system and stock driver board. If, however, you have an upgraded power supply, an upgraded quad cap (80, 40, 30, 20) and change out the stock driver board to a VTA driver board then the amp WILL make more power. At midband (1000 Hz) the amp will put out about 45 watts before clipping. At 20 and 20 KHz the amp will put out a little less power but still be at 32-35 watt range. Check the link below to an independent test of one of my ST-70 kits done by Russell Knize.