I have an older PAS-3 preamp that always worked well. Recently I have noticed that after it has been on a few hours just the right channel will crackle and then sometimes cut out completely. It may come back on a little but it usually craps out again a few minutes later. I have replaced all four of the 12AX7 tubes and it still does it so it isn't a tube. Any idea what could be the cause ?
RockyAM
Bill Tho

While there are probably 200 reasons why this *might* be happening, MOST of those reasons are "cold solder joints". When the unit is "acting up" go around the Line Stage board (PC-5) and gently push on each component with an insulated "pusher" (a pencil with a clean eraser works VERY well for this.) Don't go TOO crazy with the pushing - you REALLY don't want to crack the circuit board, but a little pressure might find the culprit. If this doesn't do it, it'll probably be time to do some real troubleshooting. The GOOD thing is that you have one circuit that works correctly and one that doesn't. You can measure the Voltages at the tube sockets on each channel and compare the good readings with the bad readings.

Try the "pushing" method first. I'll bet you'll find a poor solder joint, or a cracked resistor may be the culprit.

(If the circuit boards were more "robust" I would just suggest re-soldering every joint, but heat is the enemy of the PAS preamp circuit boards. That is a "last resort" type of "shotgun" approach to repairs.)

Hope this heads you in the right direction.

Bill has given good advice on the pushing of components on the two boards. Sometimes you can trace the channels on your preamp because on most PAS-3's the wires for each channel are coded. You had said that it was the RIGHT channel that was giving you trouble. On most of thos PAS-3's the RIGHT channel is wired with RED wire and the LEFT channel is wired with GREEN wire although whoever wired your unit may have used his own custom wire of some other color. If you have the red and green wire look for issues (bad solder connections, cracks in the circuit board traces) on the side of each driver board where the RED wire is coming in and out of the board and also push on the components on that side of the board as Bill has said.

Other things. If the problem only occurs on PHONO then probably the issue is on the PC-6 board. That's the board next to the selector switch. If it occurs on ALL signal sources then the issue is probably on the PC-5 line stage board which is the board just behind the tone and balance controls.

To Bill - thanks for your excellent comments and ideas. Stop here again and visit us. Your wealth of knowlege is appreciated ...

Bill and Bob - thanks for the ideas. I am not an electronics whiz. I won't be able to get to the preamp to work on it until this weekend. I'll let you know what I find when I take it apart this weekend. Bob - thanks for clues on the different colored wire for each channel. As I remember when I replaced the tubes the PAS-3 does have red and green wiring inside.
RockyAM
Bob Latino

Check out the photo for help. 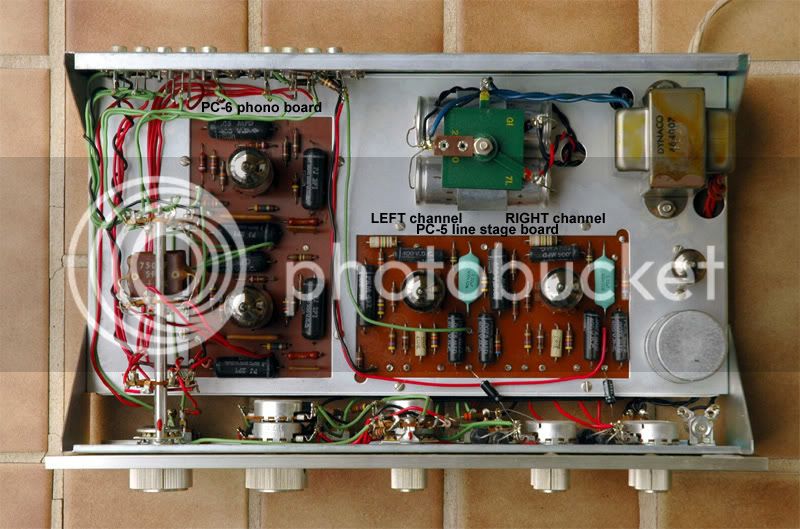 great photo of a stock PAS3 Bob, thanks
most already know the Dyna PAS3 was the most popular tube preamp ever sold and there's probably over 1/2 million of them out there, most in pretty bad shape, I hope to write a complete restoration manual on this after the holidays, but as I've stated on my website before there are preferable alternatives which I won't go into now.
Both Bob and Bill had great input on this, if a little probing and resoldier doesn't do the fix, the next thing to do is replace the PC-5 PCB with a new one (assuming the problem is on all inputs) and/or replace the PC-6 PCB if the problem is only with the phono stage.
In ALL instances of PAS3 usage, I make the following MINIMUM recommendations, some of which some people will not agree with, but here goes . . .
1 - replace the power supply
(PCB available with both B+ and filament upgrades available)
2 - replace the PC-5 PCB line stage
3 - replace the PC-6 PCB phono stage
4 - remove all the tone controls and tone switches
5 - replace the selector switch
6 - replace the volume control and balance control
7 - replace the input & output jacks (PCB available)
well, I know, so now I've replaced almost the whole preamp, which is the point I get to everytime I discuss the PAS3, it's a nice preamp, but it's old, it's worn out, it has problems, and the fixes cost about the same as an all new (and much superior) replacement, but that's another subject for another time.
I plan to offer all these options in the near future for those that want to keep their PAS3 preamps, as my options will probably cost half as much as what anyone else has available for sale, meanwhile, my ultimate alternative is on my website
Roy www.tubes4hifi.com/pre3.htm
RockyAM

I think I fixed it ?

Yesterday I took off the cover and bottom plate of my PAS-3 and found that there were no loose wires or wires pulled out of the little solder holes. I tapped all the components but nothing happened when I did. What I did do was resolder all the connections on the right side of the PC-5 on both the top and the bottom of the board. (Bob - thanks for the photo pointing out which side of that board was for the right channel) I have been playing the preamp now for over two hours with no problems and no crackling or cutting out of the right channel. It usually started to cut out after maybe a half hour of playing so I may have solved the problem. Thanks for the help.
RockyAM
Sponsored content