Hi,when cd's came out around 1983 I got interested in passive preamps.I figured,Why does that music have to go thru so more electronics after leaving the amp.At the time I had an early passive unit with a phono stage in it,the Ace Zero Distortion preamp.I still have one and have never seen another.It was reviewed in HiFidelity magizine.It still sounds great with oiled up slide pots.I desided to make a passive preamp with top components.I named it the (Simplisitor).It is a monsterously big passive preamp.To show the scale,I live in Portland Maine,I rowed my dory up on it at high tide after pulling up some lobster traps 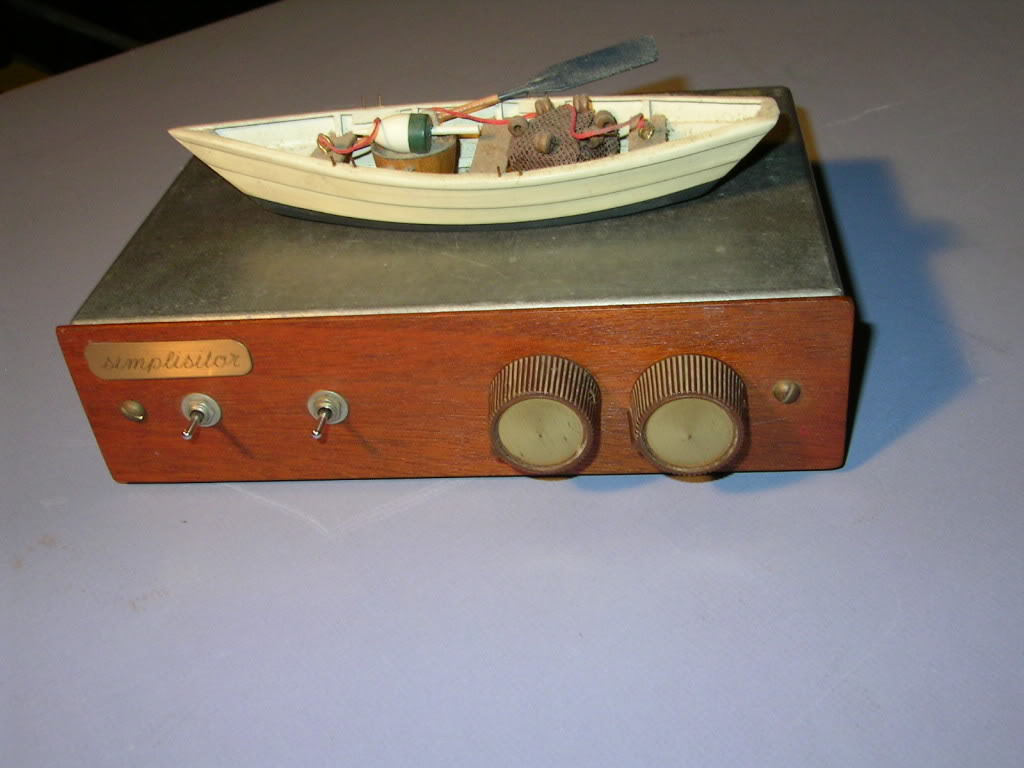 " alt=""/>
All right,I'll buy a beer to any of you Dyna nuts that tell me where I got the knobs from?I used a Hammond aluminum box,2 silver double throw double pole switches,silver wire,gold plated RCA jacks,and 2 Alps Black Widow or Black Beauty 100k pots,they are not stepped attenuaters,but have never made a hiss or peep.I went to the local hobby shop and made a faceplate.The (Simplisitor)logo was made for cheap at a trophy shop.Here's a look at the innards... 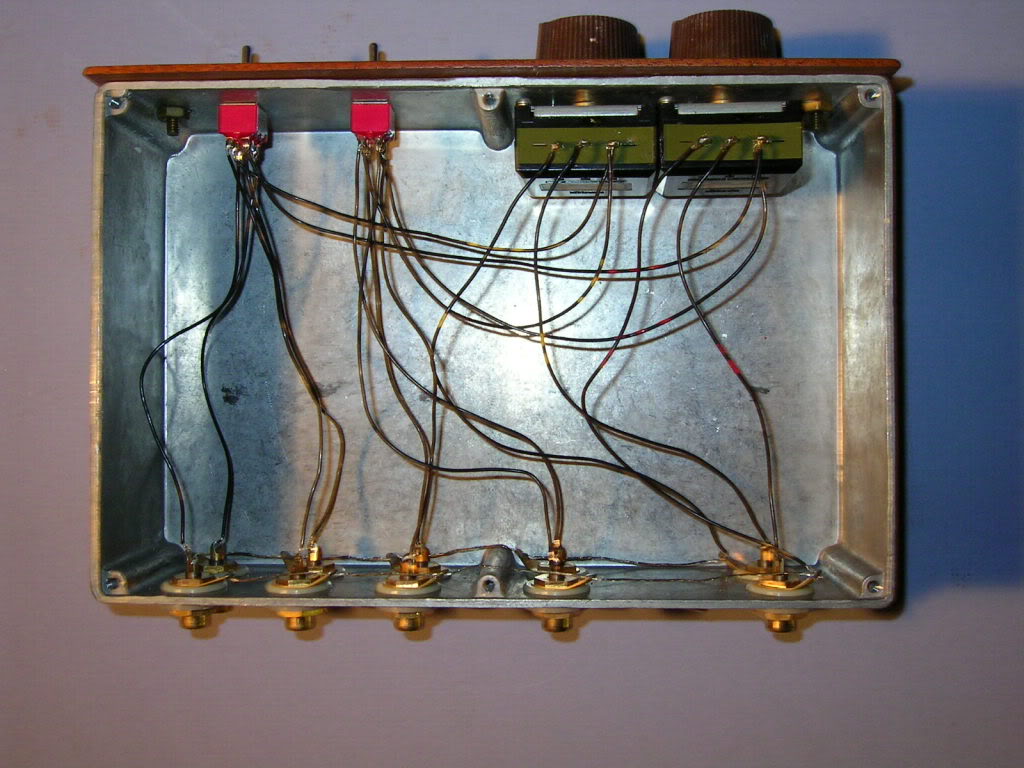 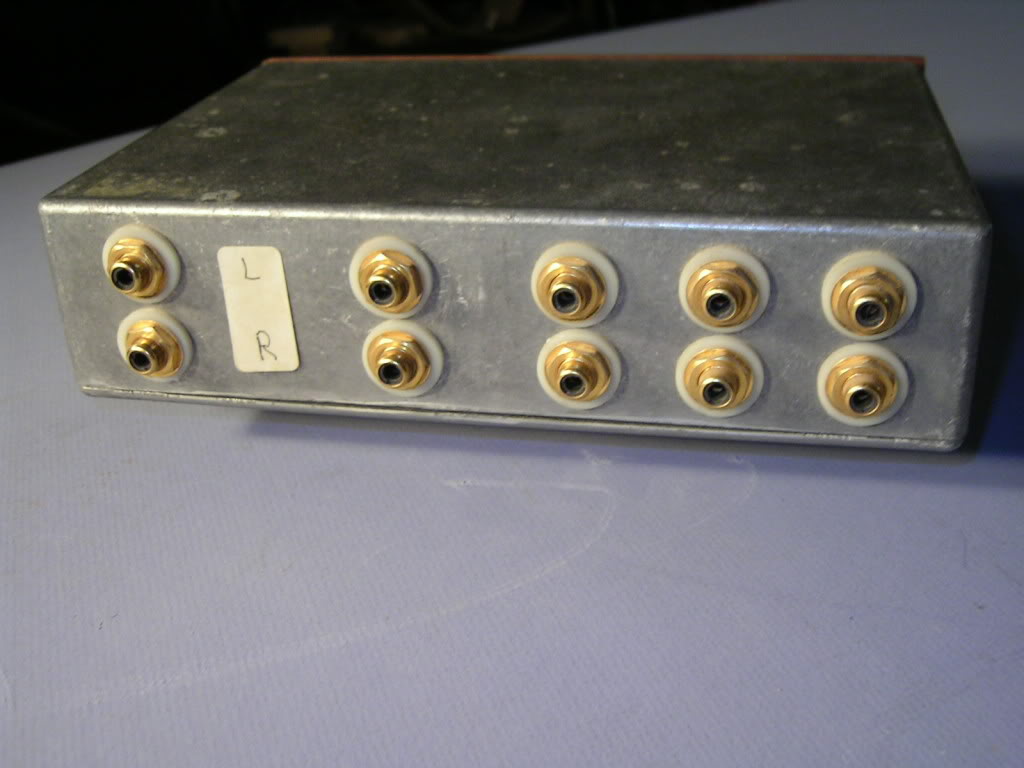 " alt=""/>For a few years,with my Dyna-35 as the amp,I was happy as a clam!Then I read an article in AudioXpress by Jack Elliano called (Passive Preamp;Transformer Implemented...Jan. 2005).I bought 2 transformers he used in his simple design and built a prototype with Radio Shack parts....it worked!I then looked around my crash pad with old Dyna's and Heathkits every where to trip over and looked hard at the Dyna PAM-1.I bought one on E-Bay that looked pretty dirty...take a look 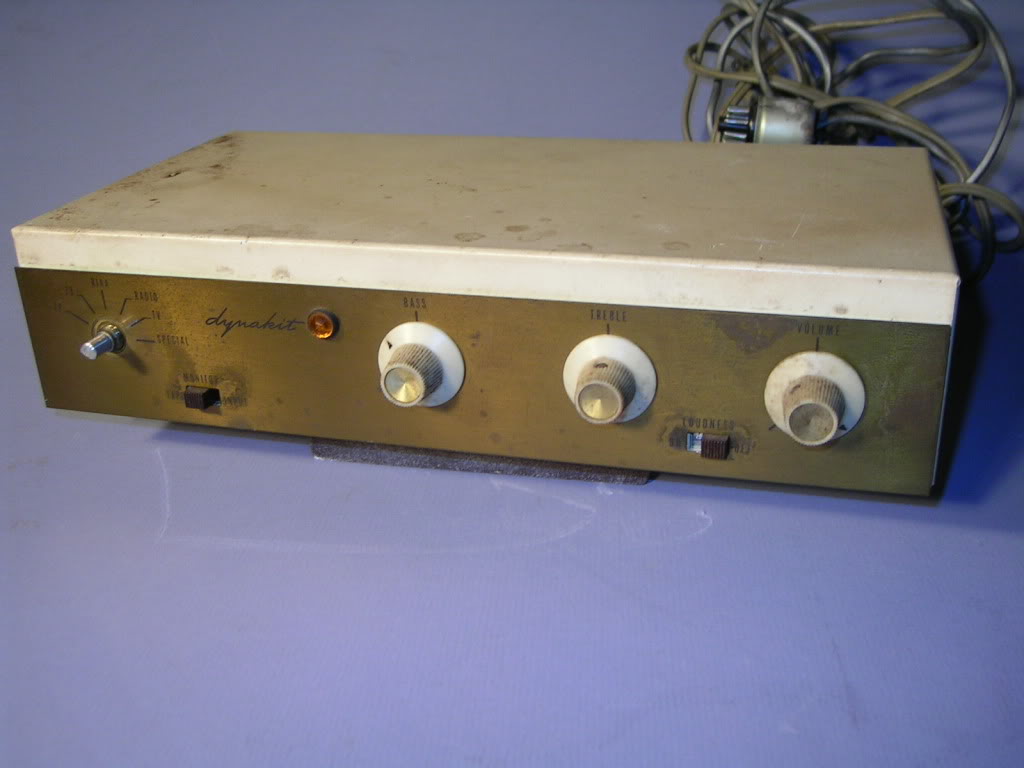 " alt=""/>After I gutted it out,like a fish,I spray painted it brown with some Rustoleum.A song popped into my head from (Carousel)a Richard Rogers musical that went(look at those clams!),but I heard(look at those holes!)all pre drilled that fit the RCA jacks and my new volume controls which I will explain later.If you look closely,I had no painters tape to mask of the shiny instructions on the back,so I used an old refrigerator magnite with the Boston Red Sox's 2006 schedule and trimmed it with a Swiss army knive's sissors that was hanging on my coffie table. 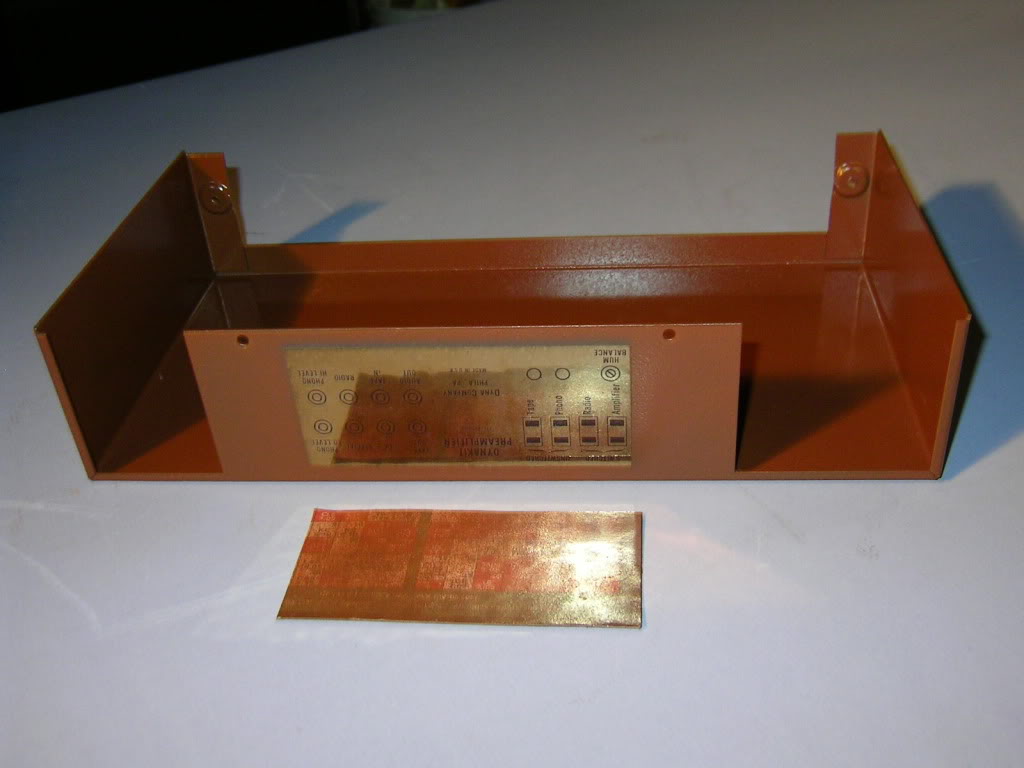 " alt=""/>
Well thats all for part 1.I now,in the next few days,will assemble and wire the PAM-1 to the passive transformer preamp.I'm just learning the image thing and have to shift some more pictures(images)to the Photo Bucket.....stay tuned,it gets way better Dawkus(mark.korda@myfairpoint.net)
Dawkus

Hi all,I have 2 more photos of which one I missed in part 1.When I said that line(look at them holes-clams,I was supposed to have inserted this picture which shows all the holes you don't have to drill or punch out....lets try this one.. 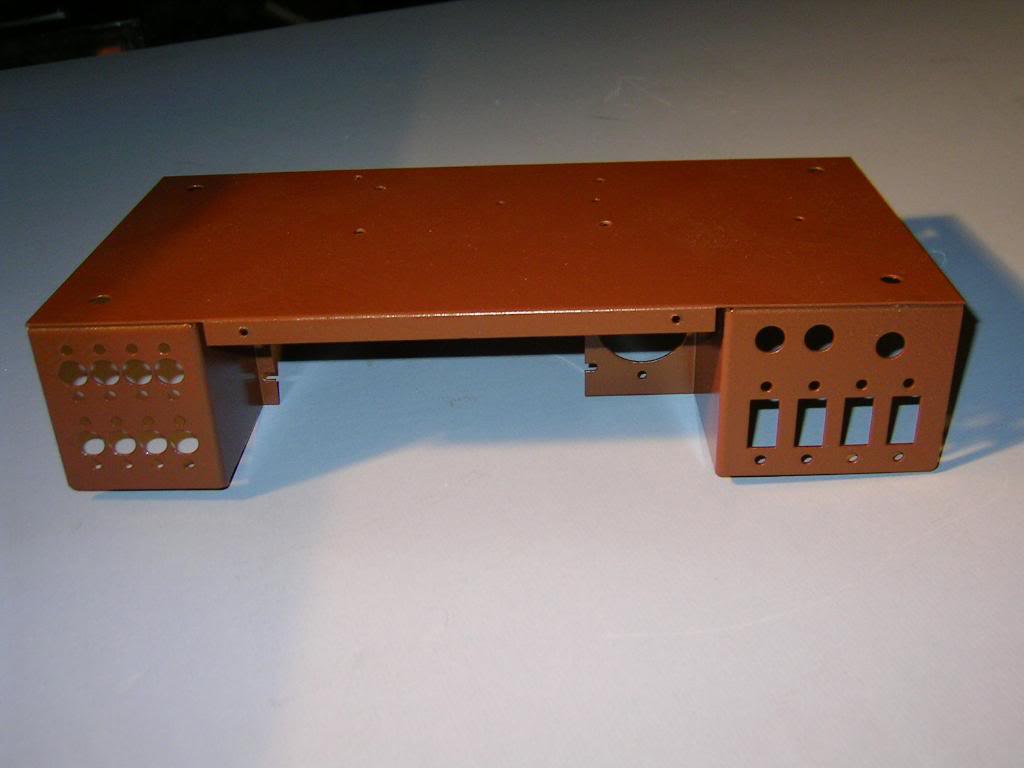 " alt=""/>
Before I finish the assembely and wiring I am going to show you the parts needed and saved to finish the Dyna PAM-1.I bought the gold RCA jacks at Madisound,the speaker parts giant.For my 2 volume controls(no balance control needed when 2 volume controls are present)I bought at Jack Elliano's circuit demands,2 Goldpoint 10k stepped attenuaters,the best I could find.The wood(walnut)showing was bought at the local hooy shop to make a face plate and cover un used holes.I can modify it for future add ons,as I want more flexability to add high level sources as my first passive preamp had(4).The gray plastic stuff showing is to be cut into different shapes to cover holes in the back for dust prevention and looks.One thing I also bought at the hobby shop not showing was a plastic model of (DR. Evil)....thats the coolest thing!The tape showing is double sided to stick the gray plastic on.My images were shot with a Dimage E323 Konica-Minolta point and shoot with 3.2 pixels.I bought it 5 years ago or so.I bought a big piece of light blue paper at the art store,you can bend it,and shot the pictures in my tiny 1 room apartment with a construction bright light on a stand that the painters and dry wallers use to see better,thats what I do.I think there called Hallogen lamps,very cheap at Lowes or Home Depot.I for went the zoom lense and set it at the wide angle setting(micro,close)as my freind told me.I used the (fill-flash)as long as the construction light too.My point being that I think the pictures came out pretty good for a 150.00 dollar camera.Ok you Dyna kooks,here is the picture of the parts ending Part 1 officially......stay tuned Dawkus(mark.korda@myfairpoint.net)I would like to thank the guy who helped me or guys which I think are SBrown and of course Bob Latino who helped me figure out the imagery...Mark. 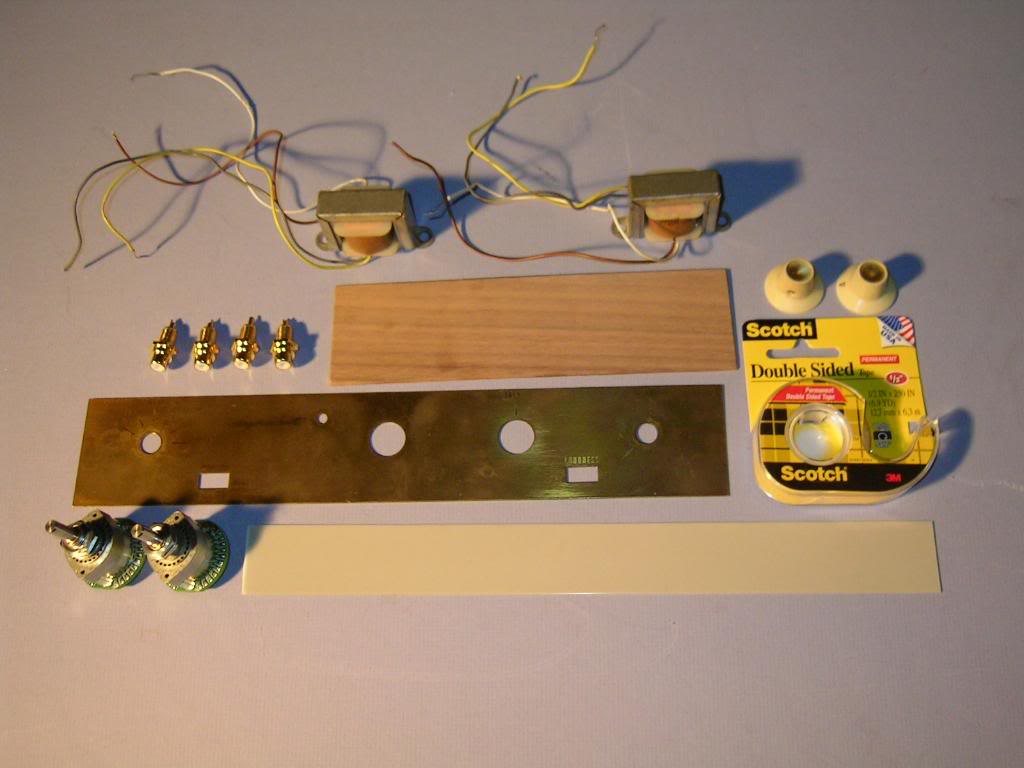 "All right,I'll buy a beer to any of you Dyna nuts that tell me where I got the knobs from?"

Those knobs probably came from a Dynaco PAS-2 or a Dynaco FM-1 tuner - BUT - since an FM-1 has only one of those knobs and the PAS-2 has TWO (both volume and selector knob) like that - I am going to say a Dynaco PAS-2 preamp. Did I win the beer ? - lol

Those knobs probably came from a Dynaco PAS-2 or a Dynaco FM-1 tuner - BUT - since an FM-1 has only one of those knobs...

Minor nit (at the risk of drifting off topic): it's been a while, and my own FM-1/FMX-3 got an FM-3 faceplate and knobs long ago; but wasn't the FM-1 tuning knob different, with NO POINTER?
Sponsored content