My old ST70 is healthy and running fine with EL34s.
I'm not a tech.
I'd like to put this new reissue quad of 6l6g's in place of the EL34's.
I've heard these work great and I just like the way they look.
I guess I'll need to re-bias the amp. I've never done anything like that. I always have my tech do stuff like this.
I called my tech and for the first time he told me he didn't know anything about that.
So is this something I can do with out wiring mods and just a cheap multimeter or shall I keep looking for a better tech?
I live in the Portland OR area.
I'd welcome any help. Especially pictures or a coloring book or something.

The general recomendation from Roy and myself is that biasing these amps at Dynaco's recommendation of "1.56 VDC" per each channel is probably a little high with the tubes made today. Dynaco got away with it years ago because they shipped the ST-70 amps with Mullard EL34's. The Mullard EL34's were some of the finest sounding, most durable EL34 tubes ever made. They would take the high bias point (about 50 milliamps per each output tube) in stride. The general recomendation now is to bias these original boarded ST-70's at about 1.25 VDC per channel which gives about 40 milliamps bias current per each output tube. Your tubes will last longer and the amp will sound the same. I still have one totally original ST-70 here. I have biased this amp at 1.56 VDC and at 1.25 VDC. I cannot tell the difference in the sound of this amp.

Biasing an original ST-70 is not difficult to do. Connect the speakers and turn the amp ON and wait a couple of minutes for the amp to warm up. Make sure that the amp is at idle. (no music being played) Set your multimeter to the 0 to 2 volt DC scale. Place the RED probe in the front hole of the left front tube socket that says "BIASET 1.56V" and the BLACK probe any where on the chassis. Adjust the left bias pot so that the meter reads 1.25 VDC. Now do the same the same on the right channel. If you go back to the left channel the bias that you set at 1.25 VDC will now probably be a little low. Go back and forth between the two channels until both channels read 1.25 VDC. What you have done is made an "initial" bias setting. Over the next half hour as the tubes warm up the bias will creep up slightly and the 1.25 VDC that you set initially may now be 1.37 VDC or something like that. After a half hour when the amp is fully warmed up READJUST the bias to 1.25 VDC on both channels.

Bob, I could not have asked for a more succinct answer to my question.
Sounds wonderful. Thanks! 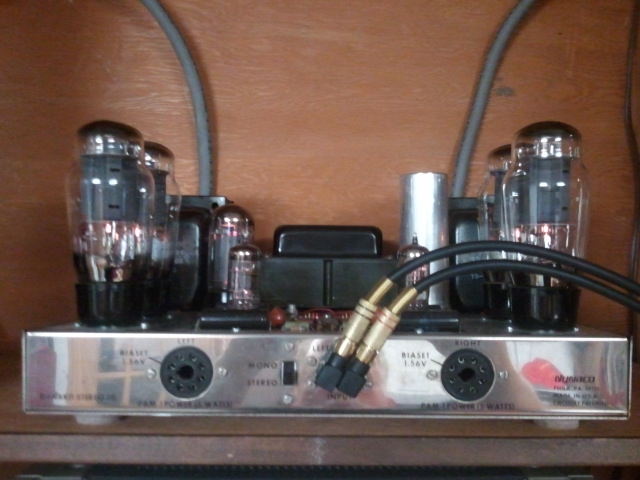