Re: Tube and solid state rectifiers in Dynaco amps

Solid state rectifiers have a few advantages. They are usually trouble free and don't require any heater filament supply because they're not a tube. It's one less tube to share the heater filament supply. They also don't "sag" their current delivery like a tube rectifier at high current demands when the amp is playing at high volume levels. This usually translates into better and more solid bass at higher volume levels. They also don't cost that much ($10 - $25). Compare that to your "boutique" Mullard GZ34 which will run you $50 used or $100 + for a NOS Mullard GZ34.

Are there any disadvantages to solid state rectification? Some solid state rectifiers (T-SSR01) apply their high voltage immediately and some say that this can cause "cathode stripping" on the output tubes and shorten their life. Personally I have never seen any problems like this and IMHO output tube life is about the same whether you use a tube or solid state rectifier. The Weber Copper Cap does have a 2 or 3 second delay built in if that worries you.

Personally I feel that solid state rectification is a viable alternative to using a tube in the rectifier slot. If you are a purist, however, and want to keep your ST-70, Mark III etc. totally original then it probably makes sense to use a GZ34/5AR4 TUBE as your rectifier. 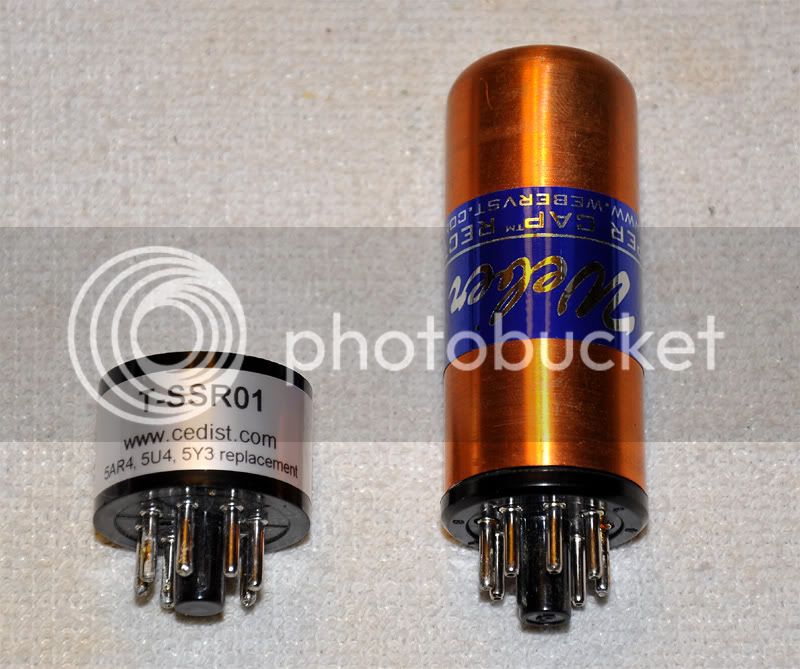 One thing to be mindful of:
If you remove the copper cap after a few hours of use and you don't grip it by the base (and grip the copper instead), you risk pulling the casing off the base, thus exsposing the rectifier's guts . Apparently, the heat dissipated through operation softens the adhesive used to bind the copper to the base and you end up pulling the top off and getting a bit of white goo on yer hands.

It's actually a convenient trick if you're one to upgrade diodes and resistors, though I've not bothered. At any rate, I've taken the "Weber" stickers off my copper caps and polished them with metal polish for a more tasteful appearance.

Brinkman wrote:One thing to be mindful of:
If you remove the copper cap after a few hours of use and you don't grip it by the base (and grip the copper instead), you risk pulling the casing off the base, thus exsposing the rectifier's guts . Apparently, the heat dissipated through operation softens the adhesive used to bind the copper to the base and you end up pulling the top off and getting a bit of white goo on yer hands.

It's actually a convenient trick if you're one to upgrade diodes and resistors, though I've not bothered. At any rate, I've taken the "Weber" stickers off my copper caps and polished them with metal polish for a more tasteful appearance.

You are quite correct - the heat does soften whatever adhesive is used to adhere the Weber's copper tube to the plastic base. Gripping the Weber by the plastic base alone though, as you mentioned, is very difficult since the base is only about 3/32 of an inch thick. What you can do is use a wide flat screwdiver to lever the Weber up out of the socket a little until you can grip the base with your fingers OR not fully insert the Weber all the way down against the tube socket base so that you can pull it out by just tugging on the Weber's plastic base.

Based mostly on this thread I got a Weber Copper cap to try in my ST-70. I installed it and rebiased after a warm up period. The bias jumped around slightly but I am not sure if that is the Copper cap or not but it did seem to jump around a bit more than biasing with the mullard. I have been using a nice 1959 Mullard 5AR4 up to now. I have been listening with the Copper cap for a few hours now. So far I cannot tell much difference between it and the Mullard. The only thing I really notice is a possible slight increase in bass. The other thing I notice is that my power transformer is running considerably cooler. I am going to keep comparing them and see if I can detect any other differences. So far I am pretty impressed overall.
Bob Latino

The Weber Copper Cap will give you a higher bias voltage than with a 5AR4. When you switch to the Weber from a 5AR4 you will have to turn the bias DOWN slightly to get your output tubes to the proper bias voltage again.

Since there is no heater on the Weber Copper cap your power transformer has one less tube to supply filament current. That could be a reason why the amp runs a little cooler.

The slightly more solid bass, especially at higher volume levels is the most common sonic difference that people hear when they switch to a solid state rectifier.

rwferr wrote:....The other thing I notice is that my power transformer is running considerably cooler....

Thanks for the info, rwferr. I always felt that it is somehow sacrilegeous to run a solid-state rectifier in a tube amp (even if millions of Chinese and other tube amps do so), but a cooler-running power transformer is an attractive proposition for me. I work from home mostly, so my ST-70 runs day and night. If I can save a few degrees in heat on the power transformer I will do so. And it is good for the planet, too! ;-)

I have been using it constantly for a couple of days now and I can lay my hand on the power transformer and keep it there. It still gets hot but before I could not keep it there without being uncomfortable so its definitely running cooler. As for sound I have personally not noticed any degradation and I have five nice Mullard rectifiers in my drawer.

The best sounding tube amp that I've built does use a solid state power supply. I ascribe the good sound to the huge capacitors that I used, not having to worry about damaging a GZ34. I did use a power delay circuit, and additional grid stopper resistors.

However, I worry about replacing GZ34s in Dynacos with solid state rectifiers because the voltages will rise to a point that may be dangerous for the filter capacitor. Filter capacitors last longer if they stay cool and if you avoid pushing the voltages to the limits.

The amp I built uses a voltage doubler, and it is easy to use capacitors with a high enough voltage rating.

Particularly in a Mark III, you would need to use a cap board, rather than a can capacitor to get a sufficient voltage rating. Now there's a catch: you can't get very large capacitors in the right form factor to fit on an under-chassis cap board, and the big advantage of the solid state rectifier is gone.

I've tried them both, they will provide slightly more power and definitely faster deeper bass, but I tend to NOT recommend them myself. Output tubes need at least 15-20 seconds of delay before B+ is applied to allow their heaters to warm up, and to prevent cathode stripping. That's probably not a serious issue for some as the tubes will probably still last a couple years, but do take care of the increased voltage and the fact that could damage some capacitors, especially if you are still using an original quad cap.
Now, on the issue of using them in a tube preamplifier, again, I've had it both ways, and my preference is definitely to use a tube rectifier in a tube preamp, for many more reasons.
You get an automatic soft-start, so you don't need any muting switch for turn-on & turn-off, and that is a big issue if you use an SS rectifier, you'll get a huge POP which can damage your speakers, your amp, your ears. They also SOUND better IMHO, kind of like the difference of using an inline choke in the power supply, such as CLC instead of CRC filtering.
Makes a definite difference in the quality of the sound!!!
LEVLHED

Anyone else have an opinion on the sound of the Weber vs. the oft lusted-after Mullard?

All I really care about is sound, and if one really can not tell a difference (apart from perhaps enhanced bass, which is a good thing to me!) then I see no reason to not use a Weber!
vegaseddoc

How about a hybrid rectifier? I have been contemplating the rectifier dilemma for several days now since destroying my Ruby. I like the copper cap but I miss the glow of the tube on the chassis. I think one way to solve the problem is to continue using the 5AR4 but add a pair of 1N4007 rectifier diodes at position 3 to 4 and 5 to 6 on the posts of the rectifier socket. Then connect the power supply to position 3 and 5. This should decrease the pounding the tube takes and will also allow a 15 second delay for those worried about cathode stripping of the output tubes. Also, the tube will still be glowing on the chassis in its original position. Lastly, this would cost about a "dollar" (diodes are cheap) and you would not need a Mullard tube. Any of the new tubes would be fine. I'm not sure about sound though. The tube would become a more passive component so I imagine it would have a more "Solid State Sound".
Sponsored content