I am not aware of any Dynaco old, script logo with the wording, "dynaco."

Nor of any Dynaco logos with the new style lettering and "Dynakit."

Always glad to be shown examples that violate the above, however. I haven't seen EVERYTHING.
howlin' hoosier

Just to add a a bit of lore to this: Dynaco did not have a factory of any nature until it moved to Jefferson Street in Philadelphia. Powelton Avenue was a combination office/dual garage, single story building. "Factory Assembled" units were done by Drexel students on piecework, hence the great variety of wiring colors, styles of wire, rivets/screws/machine screws and so forth displayed over the years.

"Kits" were packaged and boxed by sheltered workshops, with components and parts supplied by various jobbers to those locations. And, each part, component and piece - other than transformers and tubes - were supplied by the lowest bidder of the hour. David Hafler was consistent with his tubes and transformers, however. In fact, in the early days, he did change his sheet metal source at least once. I do not know if this explains the differences that way, it might.

Jefferson Street (Across the Schuylkill river, in an equally marginal neighborhood) is a two-story, high-bay 'factory style' building of about 35,000 square feet that still exists. It is here that Dynaco first transitioned gradually from "piecing out" to having actual assemblers on-site. Their kit boxing and shipping was still done by sheltered workshops right up until the Tyco takeover, when all operations moved to Blackwood, NJ. Note that when Hafler started his eponymous company in Pennsauken, he went right back to his roots - the 'factory' being a two-bay garage with a small service bay and a few offices attached. Again, assembly was done by local job-shops and kit boxing and shipping by outside sources as well. I am not sure if the sheltered workshop relationship still remained, in my conversations at my one visit to that location, the staff was not very forthcoming, unlike with Jefferson Street and Blackwood.

Note that Hafler also farmed out it service functions to local shops as well, the service bay in Pennsauken was mostly for quick diagnosis. Anything more involved went out to a shop a few miles away, also in Pennsauken. I used them on several occasions as some of the early Hafler stuff was pretty rough 'from the factory'.

In any case, the history of the company and of its roots is quite colorful.

Yes, this is a few years late - but here it is.

To my knowledge all fact builds had a serial # kit had no serial #.
Peter W.

audiofreak1954 wrote:To my knowledge all fact builds had a serial # kit had no serial #.

The later kits (from the late 70s, anyway) came with a serialized sticker that one could initial and date. I expect few of them got installed, but I still have one on my FM-5 from that time.
audiofreak1954

Not sure about other units only the st70's. But no # on kits.
knotscott

Anyone ever notice a difference in the size of the PT between a factory wired and kit ST-70?  I have one of each, and noticed it when I was working on the kit amp.  At first I thought it was my imagination, but I measured them, and the laminate stack is 1/4" thicker on the Dynakit than the factory wired model.  The kit was purchased in 1964. I thought the factory wired version is about 3 years older, but I could be wrong.  Thoughts?

The pic below shows the stock factory wired amp (left) next to a kit model finished with the VTA PCB:

Were there "factory assembled" PAS 2 preamps?

The person I bought it from said that back in the day if workers had extra time they would assemble PAS2 preamps. This PAS2 looks like it has has all original boards and components. The wiring is extremely neat compared to most have seen. The RCA jacks have completely different wire colors than just the regular green and red wires. The solder joints are very clean and almost all look to have the same patina.

Maybe this is just a neatly done rewire? I did see two diodes added to he the selenium rectifier. The solder joints here look shinier than the others. Too bad the OG tubes are missing.

No rivets. No factory labels. Haven't been home yet to listen to it. Work travel. 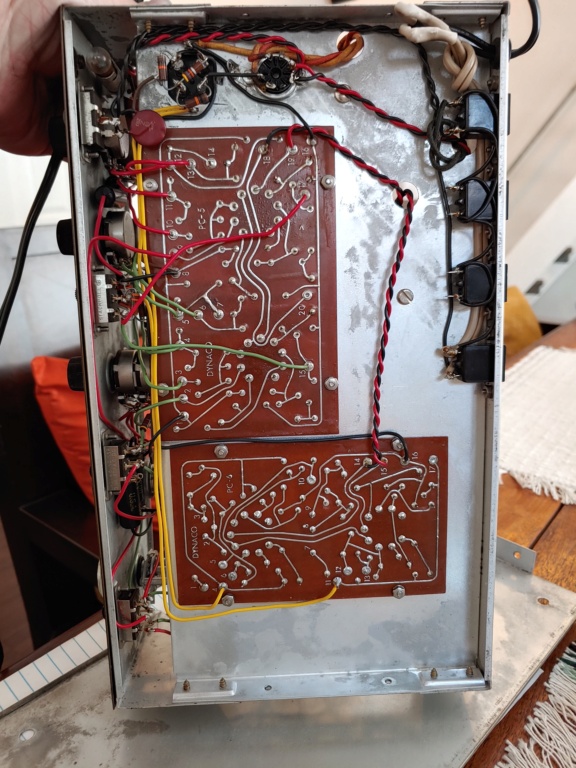 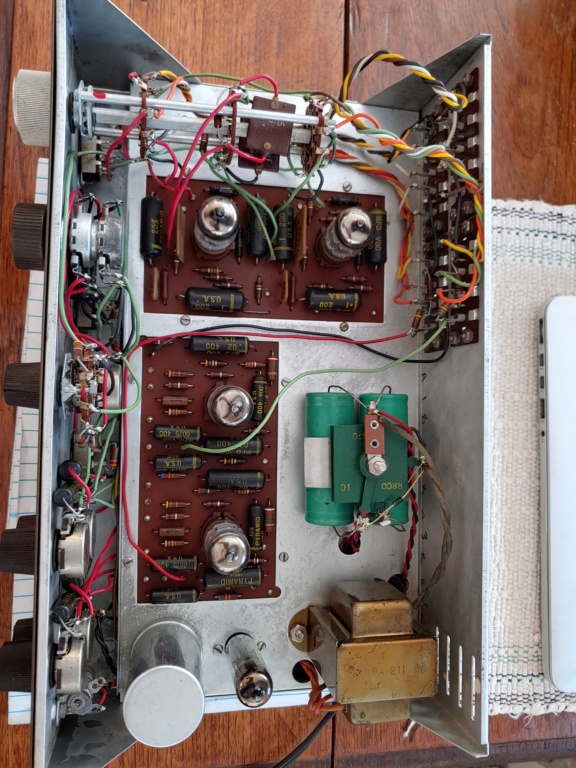 To repair/rebuild, that is the question

Hello everyone:
This is my first foray into this forum and I see some very interesting things concerning the Dynaco equipment that has been posted. I built a Stereo70 amp and a PAS pre-amp back when I was in college (~mid 60's) and used it for many years and was always pleased with its performance. That is where my background on Dynaco came from so when I see Dynaco pieces today, I understand the value in this vintage tube equipment. I visit a lot of estate sales and have seen Dynaco pieces on occasion. If I can grab some, I do, but it is tough unless you in the first 10 people who get into the sale. They don't last long.

So here is my question. I bought a Stereo 70 amp and a PAS-3 pre-amp which I intend to sell. What is the best strategy to do that on eBay? I found a local vintage stereo equipment person who will go through both items and make any repairs necessary (which he will charge me for) so that I can sell them as repaired/refurbished which brings a better price and gives me the confidence to sell them in that condition. The other option would be to post them on eBay in "as-is" condition and let someone else do the refurbishment. They are both in very good cosmetic condition but have not been powered up. I took the cover off both and cleaned up the dust etc. The PAS appears good and all there with nothing obvious wrong with it. The Stereo70 however has a cracked and smoky inside rectifier tube ( I believe #GZ-34) so I know it needs help.

Thanks for reading this and let me know your thoughts.